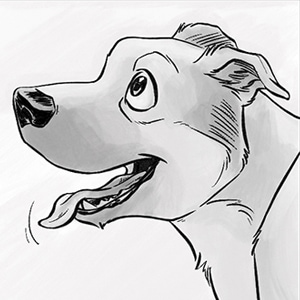 Procreate and Photoshop for digital, brush pens and fineliners for traditional

After several years of working (and reworking) my main comic project featuring my dog character Luna and getting stuck time and time again, I decided to break up the story into a series of short "Mini Comics." The first of these mini comics is titled "Luna's Hunger Pains," which I'm mainly using as a test. I also decided to create these comics digitally instead of traditionally in hopes that it would speed up the process (as long as I resist my perfectionist urge to redo everything!) My hope is that this will allow me more flexibility creatively to grow and change as an artist as I learn new things about making comics along the way. It will also give me something more to show for my work, rather than never finishing a giant project for years. So, in conclusion, I'm still wanting to tell the same or similar story as I started with my old comic "Luna", but I'm going about it a different way.

Thank you and stay safe!
Reply  to conversation