Gabrel and Hala were sitting in the living room, Gabrel felt sleepy and his eyes started to blink in slow-motion, he even was lying on his mother's lab, trying to endure sleeping, when Hala received Elmos's message, she released a breath of shock with wide eyes.

“Mama, when will papa come back."

Hala quickly turned to a calm face and looked at Gabrel.

Gabrel left his head up to face his mother, he was looking at her with expressionless features, Hala grabbed his shoulders gently and looked directly to his eyes.

"Gabrel, you have to get out of this village as fast as you can." Said Hala with a calm voice.

"B-but why? I still want to see papa, when will he come back?"

"Your father told you to listen to me, right."

"Then don't ask anything, your father will be so happy if he knew that you did what he said."

Hala was using these deceptive words to make Gabrel do what she said, she used her beautiful calm voice to make him feel that everything is ok.

Hala then stood, went towards a wall in the living room, and opened a secret door with downstairs, Gabrel made a calm sound of surprise when he saw this, he normally didn't expect for a secret door to be in the house.

"Go inside, you will go out of this tunnel after five minutes walking, then go forward and you will arrive at the continent’s main village."

Gabrel was looking at his mother with a questioned face, though, his blind faith and obedient self, made him do everything she says without asking, he went downstairs to the tunnel and looked back at his mother, he didn't know this was the last time he sees her.

"Be careful, Rel." Said Hala with a forced smile.

Hala closed the door of the tunnel slowly, darkness had fallen upon Gabrel inside of the closed tunnel, there wasn't any source of light inside along the way, he couldn't even see his fingers.

Gabrel was walking slowly, the tunnel was straight and the ground wasn't slippery and didn't have any kind of bumps, which helped him not to fall in the way to the end of the tunnel, he started his line of thoughts while progressing carefully step by step.

"Why did mama made this worried face without a warning? Why did papa go to his work again? I'm curious and worried, I didn't see my parents doing this kind of faces before, my parents are strong and stubborn, they didn't act like that before."

Gabrel reached the end of the tunnel eventually, his line of thoughts was cut when he saw small stairs leading to the roof of the tunnel, there was a small door with a handle above.

Gabrel grabbed the handle and started to push with maximum effort, his small tired body couldn't left this stuck door, but he didn't give up, Gabrel moved backward and summoned his piano.

He then pressed some buttons to make a sound and control it so he can open the stuck door, he amplified the sounds he created and made it more powerful.

Gabrel was struggling to the level that made his face start to sweat, the pushing force of the sounds managed to open the door, only to unleash the cold breath and the roaring sound of a blizzard.

This area of the continent is covered with snow all the time, even in the middle of the young days of the summer, Gabrel's luck was good enough to particularly collide with this merciless blizzard, especially at a time like this

Gabrel didn't hesitate for a second and went out of the tunnel, his feet were sinking inside of the snow in every step, the snow was so thick which made him feel like he will be swallowed a whole.

his legs were getting heavier and heavier, his eyes were losing the light, the cold was eating his body slowly, but a shadow in the middle of the blizzard can be seen, it's a shadow of a man.

Gabrel tried to use the last drop of energy he had, but that wasn't enough for his voice to reach or be heard in the whistling of winds, his body gave up entirely and lost consciousness.

Gabrel can only consider this bitter moment as a Prove of his weakness, he thought that this was his last moments and started to curse himself for it.

"How weak, how pathetic, when I just tried to do something on my own, I failed, I'm a little kid? There was a big blizzard in my way? just excuses to feel better, I'm the son of the sound village's chief, one of the strongest in man's history, the blood of the master of sound is inside of my veins, though, I failed."

A lot of people were heading to the wall, the villagers followed Elmos's orders and came to the front of the wall, when he checked on them, and he saw uneasiness coloring their faces.

Elmos straighten his face and took a big deep breath, he decided that a speech was required to explain their current situation, and with the intention of motivating them, so he made his voice loud enough and said.

“To all the residents of the sound village, I’m the chief, Elmos Fidel. We had been attacked by an unknown enemy, apparently, there are two different elements against us, earth and water, and on top of that, the enemy’s army is very huge, we saw 5 ships full of soldiers. Right now, our brave soldiers are risking their very lives for our sake, but we can’t win this battle alone, I know you’re not prepared for this, but we can’t fight alone. Right now, if we want to prevent the enemies from defeating us and to protect our precious village, all of you, and maybe for the first time in your life, have to protect your land, your village and your family by your own hands. Don’t make the fear fill your heart, don’t run and hide waiting for your death, I will only ask you one question, and I hope you will choose the right path, are you ready to fight?”

After Elmos finished his speech, all the villagers shouted in unison, there were even some villagers who said some motivating words.

"Let's show those idiots the power of our village."

"We will kick those bastard's butts back to their lands."

……I don't know about you, but I surely am motivated, you can even see the relief on Elmos's face, sure he felt happy from his insides, and who can blame him, the hope that was taken was restored.

"Soldiers, open the gates." said Elmos with a challenging smile and powerful voice.

The villagers were running to the battle eagerly, Elmos had a face like a proud father while looking at the villagers.

Elmos heard a whoosh behind him, the face that was like a proud father turned to the face of a kid after knowing where do babies come from for the first time.

"H-Hala? What are you doing here? I told you to run with Gabrel through the tunnel!"

Yup, it was his wife who surprised him this time.

"And what? Do you really think that I will run too? I’m one of the strongest fighters in the village, you will surely need me."

"W-what about Gabrel? There is a blizzard at his way you know?"

"I’m sure you messaged Pohg to meet us in the way, right?"

"Of course I did, but I still worried about him."

Elmos's face started to turn red, his eye turned down and he said.

Elmos stopped in the middle of his sentence after he noticed something on Hala's face, it was signs of dry tears.

Turns out that she started to cry after Gabrel went to the secret tunnel, knowing she won't see him again, Elmos calmed himself and chilled out, he decided not to stab her with more knives. 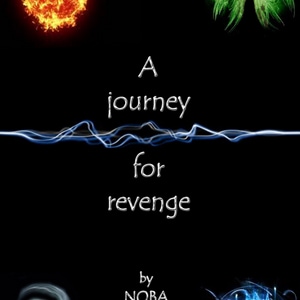