“I feel like I should have told you about the Kilander thing,” Oka said. “And there’s other stuff about me that…I dunno.”

“We did meet pretty recently,” I said. “I don’t need to know everything about you.”

For some reason that created a pang of guilt in me. Was not talking about Jeans keeping a secret from Oka?

“Well, you can tell me,” I said. “I’m pretty good at keeping secrets. I read spoilers for a movie once way before it came out and I didn’t even tell my sister because I knew she wanted to see it!”

“Alright,” Oka said with a faint smile. “It’s just been really weird since I started living with the Kilanders. Well, I technically just live with Mr. Kilander, but all the others are always there.”

“Is that the Mr. Kilander that’s like technically your dad?” I asked.

I thought about Oka’s dad barely being able to pick her out of a crowd.

“Yeah,” Oka said. “But he’s not my dad. And Caya’s not my aunt or whatever! I didn’t even remember she was technically my aunt until just now, when you said she scared you to Diast I was like, yeah, me too. But not even in a familial way, like just as a teacher.”

Oka had the look of someone who just needed to vent, which was good because I didn’t really know what to say.

“I was alone for so long, and where were they then?” Oka said. “They just show up to adopt me when it’s convenient to them? Just so they can have a little Cani daughter for their Cani school? I—I don’t even know what I’m saying. This is so stupid. I almost wish I did smash their stupid cube on purpose because it really did suck.”

I felt my heart rate spike a bit, because Oka went silent and I kinda felt like I had to say something. But saying something risked me saying something stupid and accidentally hurtful because I was trying to comfort someone going through something I couldn’t really relate to.

“Did they adopt you really recently?” I asked.

“Over the summer,” Oka said. “I’ve never had a family, but the Kilanders don’t really feel like family. And I’m from a school where we had no technology or anything like here, so it’s like I jumped into another world. I just feel stupid all the time and it sucks.”

“That’s a lot to deal with,” I said. “Why was your school so…not advanced?”

“Something about needing a pure Cani learning experience,” Oka said. “To go against the stars, nothing can be had that blocks them from the view of the night sky. That was one of the school mottos.”

“Weird…” I said. “You want me to like help catch you up on everything?”

“You’d do that for me?” Oka asked. “I don’t want people to think I’m stupid for not knowing any of this stuff, but I feel like you won’t laugh at me. I don’t know how to use a phone, any shows or movies people like nowadays. All I had at school was old tapes of musicals…”

“It’s like you’re a time traveler.” I said. “We could tell people you time travelled and that’s why!”

“While I am totally there for this story and appreciate the quickness you came up with it…can we keep it just between us until I’m more caught up?”

“Definitely,” I said. “Our secret. Where do we start?”

An alarm on my phone binged. Now I knew what her curious glances at my phone meant since they were something she didn’t have at her technology-averse school.

“Lesson one, my new pupil,” I said, handing Oka my phone.

Oka didn’t seem to understand how to use it until I swiped the screen around a bit for her.

“That’s wild.” She said. “It being on a real thing looks so much nicer than the projections on our power blockers…”

She spent a few minutes just flipping through screens, flinching slightly when their color changed too quickly. It was adorable, and I barely suppressed my smile seeing her reactions. Oka handed it back to me, and I loaded up the camera.

I tapped the screen, and Oka smiled while the camera clicked.

I made sure she could see when I checked the picture. Oka looked great despite me not giving her any time to prepare, and I actually looked OK. The dark circles around my eyes didn’t seem so pronounced, and my blonde-brown hair wasn’t as messy as usual.

I showed Oka how to take pictures and let her try. After Oka had a picture of herself making every expression she could, she handed it back to me. For a second I touched the teal cloth on her right hand, and realized I had never asked her about it. I wondered if it was a sore subject.

“Alright! My first lesson!” Oka said. “Can you show me more stuff like this? I trust you to not make fun of me for not knowing what an eGame is or why a movie called Dentist Haircut is so exciting.”

“Of course,” I said. “And I’m with you on Dentist Haircut, that was really weird.”

We giggled about the weird game and had a bit of light teasing at Syval’s expense about his excitement level for the movie. Oka’s laugh turned into a sigh. “I don’t want class to end today. I have to meet with the Kilanders after this. I assume they’re gonna talk about the cube so I probably will just blend into the background. I’d rather just stay here with you.”

I had to choose my words carefully. I had a sudden pang of worry and I knew exactly why.

But Oka wasn’t Jeans, so she wouldn’t react the same to the way I talked. Right?

“We don’t get to pick our family,” I said. “I mean, I guess the Kilanders did when they picked you. But we don’t really get to pick.”

“It’s…it’s just me and Stella at home,” I said. “I dunno, it’s sore for both of us, and we don’t really talk about it. And I don’t really know anything about why it’s…just…yeah. But we make it work. And you’ll make it work too, if it’s just figuring out how to deal with the Kilanders or carrying on the way you did before. But if you shut yourself off right away, you’ll never find out if the Kilanders can be more than just some rich jerks who adopted you for whatever reason. Maybe they actually were genuine?”

I gave Oka a quick hug, because hugs always helped me.

“And being adopted by Kilanders doesn’t make you not you,” I said. “You’re still you, and I like you, so…you’re good? That sucked, I’m sorry.”

“No!” Oka laughed. “That actually means a lot to me. You’re the first person to really make sense to me in a long time.”

I realized right then I really liked seeing Oka’s smile. Something about the way her fangs showed brought me a strange comfort.

Zeta and Oka have a talk.

Check out this survey if you're enjoying the series so far!
https://www.surveymonkey.com/r/BK2W7HR 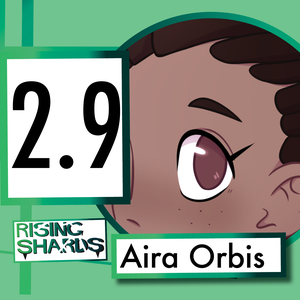