Down on Rampart, a run-down nightclub sat tucked away at the corner. The last stop on the street before brothels moonlighting as saloons promised more than spiked or straight behind the velvet curtain. Saxophones and trumpets blared from the stage, the drums syncopated in rhythm, beating in Darzsa’s ears while he got ready in the back.

“Does Rob have to pound those sticks so damn loud?” Darzsa slammed his mascara brush on the vanity. “I can’t concentrate on my look with all this noise.”

“That’s Ray. Rob’s not here tonight. You’d know that if you weren’t late.” The woman next to him had her face close to the mirror, lining her lips.

“Sorry, I don’t keep up with the band like you do, Ruthie,” Darzsa replied. “Nor lay with them every other night.”

“Dar!” A voice on the other side of him piped up, smacking him on the shoulder. “Don’t be rude.”

“Ellie, watch it. I don’t want to look heavy-handed with the rouge, like you.”

Ellie waved a dismissive hand at Darzsa and continued pinning her hair. Giggles rivaled the band’s sound, drowning out the harmonies and cheers from the crowd, creating a different jovial tune in the backstage dressing room.

She smeared her pinkie into the green eyeshadow on her lids, smudging it up to her drawn-on brows. “Well, aren’t you all berries tonight? Tell me, did one of your daddies forget to leave a few clams on the nightstand?”

The other ladies in the small space gasped in unison. Ruthie was one of the new girls and hadn’t been acquainted with one of Darzsa’s backstage chats.

“Darling, what I make from one of my ‘daddies’ is more than what you could dream of making in your best week.” He lifted his chin, admiring the matte red on his lips. “All without having to put out.”

Darzsa pushed the cap of his lipstick down with a triumphant click and stood up, smoothing out the wrinkles on his pastel green chiffon evening gown before bending over to secure the clasps on his Mary Janes.

He held his ear out, listening to guests clap wildly as the band finished their number. “Listen to that applause. Maybe one of the boys will use their share to get you a new dress or better makeup. Or watch how Barb does it unless you prefer looking twice your age.”

Ruthie glared at Darzsa and pursed her lips, smearing her freshly done liner. Fringe from Darzsa’s dress swayed and glinted in the light with every step he took toward the door. Another encore round of applause meant the band was leaving the stage, and the next act was up.

Tuesday nights were for a special performance from the hostesses of Club de Chéri. Vaudeville to musical performances graced the stage and guaranteed a full house, much like any other night. Pearl’s girls still brought in the dough long after the last Blue Book became a vestigial relic.

They closed out the night before those in-the-know slipped into the back room and were treated to the real entertainment Chéri offered.

Darzsa wasn’t allowed on stage, but he fancied getting dolled up all the same.

“And where do you think you’re going?” He would have ignored the inquiry, but the smell of Mitsuoko paralyzed him.

“Pearl,” Darzsa blurted, stepping back before his eyes watered. “Aren’t you Ritzy tonight? That new headpiece looks perfect on you, dar—”

“Don’t ‘darling’ me, Darzsa. You know you’re not supposed to be in the front. Now, go in the back and get ready to greet our guests. Strike me dead. Oh, be a doll and make sure the set-up is right for tonight. I booked a pretty little thing that’ll give Pius XI whiplash.”

Pearl rubbed her pudgy fingers together, imagining the fortune she’d make tonight. Darzsa obliged and traipsed down the hall, sneaking behind the secret door to await the patrons who’d drop in during the dull performance from his coworkers he wasn’t allowed to participate in. He didn’t bother with seeing to the arrangements as Pearl asked. Instead, he hopped up on the counter of the bar and waited for his night to begin.

Darzsa was on the first round of door duty. Five knocks and the password granted entry to soft music and dim lights. The stage was in the center of the room, an ideal vantage point from any table. He watched his coworkers flit around the room, grinning in the faces of the men at the bar. The way their eyes roamed from his curly hair down to his heels meant that these girls didn’t stand a chance.

Timid knocks at the door signaled Darzsa to get to work. Must be a newcomer. He liked seeing their surprised faces when they saw him for the first time. He called through the slit in the door, “Play the drums?”

Someone’s first time here. And a guest to boot. They came on a good night. Darzsa opened the door for them to enter. Two men entered, dressed like some of those drugstore cowboys looking for their pick of the herd. The one who knocked on the door took one look at Darzsa, and his eyes nearly shot out of his head.

“Welcome. Take a seat where you like and enjoy the show.”

He was tired of saying this same line over and over to anyone who walked through the door. There were too many men in here who would have been the type to leave home and sneak in some of the same thrills they’d get down the road for half the effort. The kind of men Darzsa could get a nice coat or suit from. The saps he’d preferably be spending his time honeying up than being on watch.

The second man appeared behind the yellow one, towering him by a half-foot. He flashed a quick smile at Darzsa and followed his friend to a table in the corner. The brief greeting stirred something in him. Had he seen this man before? He was familiar with most of the regulars and the ones who came around when they were lonely. Had he seen him somewhere around the French Quarter, or was he one of the bootleggers who made their rounds in the area?

Ellie tapped him on the shoulder, relieving him of his monotonous torture. Pale light swept across the stage and Pearl’s “pretty little thing” in their Cleopatra costume elicited awe from the crowd.

He leaned against the bar, eyeing the stranger whose gaze was holding his with equal fascination. Wanderlust devolved into loneliness the longer he stared. A pang in his chest that he always buried deep crept to the surface. Feelings he’d all but purged from his mind about home, his family.

Memories surged, overflowing until his feet were carrying him over to that table in the corner.

“Don’t you want something from the bar?” he asked his admirer’s companion. “Some giggle juice will loosen you up.”

The rookie stumbled out of his seat, clamoring for the counter.

“Is this seat taken,” Darzsa inquired as he took the chair for himself. “Josiah?”

Welcome to New Orleans! Prohibition may be in full swing, but that won’t stop the patrons of Chéri from having a swell time.

I hope you enjoyed meeting Darzsa! In case you were wondering, his name is Dar-ʒa (or Dar-zha).

As you can see, he likes to get dressed up, and there will be plenty of outfit choices throughout the series.

Most 20s slang will be easy enough to decipher through context clues, but I'll drop the definitions here for more esoteric ones.

A Blue Book was a book that listed the brothels in Storyville, New Orleans' redlight district that closed in 1917.

Next up, we'll see how well Darzsa and Josiah get reacquainted after all these years. 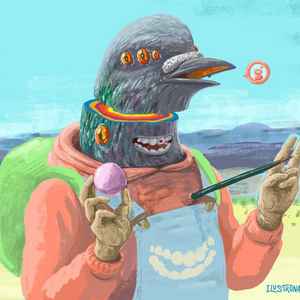 aaaaaah, darzsa is so fabulous 😍😍 and who could this guy at the table be 👀👀

your writing is so amazing too, this flow and imagery 👌 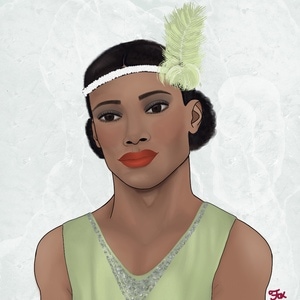