The night air was balmy with promises of spring, so Darzsa slept with the window open. He’d not gotten used to staying home so much and had to get acclimated to being at the mercy of the outside weather. The wind whirled around his bedroom, rattling the bottle of perfume on his vanity. He stretched with a groan and shut the window.

What to do today, he pondered as he crawled back into bed. His outing with Josiah was tomorrow, and he had no clue what to wear. What does one wear to a seance? Possibly something shiny or black. Darzsa hung over the edge of his bed and sorted through his chest, tossing anything behind him fitting for an afternoon of frivolity.

And to look hotsy-totsy for Josiah.

His fingers found a sharp edge, and he pulled out an opened envelope—the letter Daniel wrote to him. He wanted to throw it back down to the bottom of the chest or rip the letter to shreds and let the wind carry it away. Darzsa held the creased parchment in his hands, careful not to perforate it from how many times he folded and unfolded it to read it. He must have pored over it a hundred times the moment he opened it at his aunt’s house and a hundred more when he got home.

His hands trembled as he traced over every word, hoping to find something he missed all those times before.

I know that I haven’t sent a letter in a while, but I hope this finds you well. Things at home are about the same, though you probably don’t want to hear much about that. It’s a little too late to say, but regardless of how Mom and Dad feel, I’ll always be here for you. You’re my brother, and I love you.

I’m going to take some time to do some traveling and decided to come to visit you. It’ll be good for both of us to see each other again and have things be like when we were younger—the two of us. I’ll be due at Aunt Bea’s by the end of January. I hope to see you then.

Darzsa never knew what he meant by “in a while,” considering he had never gotten a letter since before Daniel left for Paris. A simple, “Your brother’s gone to fight in the war” from his parents; the first and last correspondence he’d gotten from them—a waste of a stamp. They did not inquire if he was doing well or not, mere months after they gave him an all too close to enthusiastic farewell.

He shoved the letter back in the envelope, burying it under a pile of old dresses. Rolling over on his back, he stared at the splinterings in the ceiling.  Doubt pervaded his mind, a constant tug-of-war between learning the truth or letting it go. What was the truth, and would he accept it if Daniel didn’t want to come to see him? Worse yet, something could have happened to him during his travels.

All or nothing tomorrow if he chose to give in to his convictions and ask Lottie. Somewhere deep in Darzsa’s heart, he’d feel better knowing misfortune befell Daniel rather than him not showing up of his volition. At least with the former, he knew his brother still cared.

Darzsa hopped out of bed and combed through the garments in his closet. A long-sleeved silk Georgette blouse and slacks for the day. Before Darzsa meddled with any soothsayers, he had to get some answers on his own.

Hopping off the back of the streetcar, Darzsa walked the next few blocks before heading down Ursulines. He bounced on the steps to the shotgun house, contemplating turning tail and walking the long way home. Aunt Bea could have cooked a nice lunch or early dinner, and it would have made the trip worth it. She was the only family he had here and took him in when he had no one else. He always vowed to come by more often to stop and visit his dear aunt.

“Are you going to stand there the whole time, or do you want to come in?” A woman yelled through the window.

Darzsa blinked, gathered his thoughts, and opened the unlocked door. He greeted his aunt with a tight embrace, careful not to snag his blouse in the unraveling beads of her tunic, and walked arm in arm with her to the couch. “Auntie, don’t you look swell today?”

“What do you want, Darzsa?” She sat down and crossed her legs. “Did Pearl fire you from that club, something or other, yet?”

“Nothing like that. I was in the area and decided to come to see you.” He took a seat in an armchair on the other side of the room. He never liked that couch. It looked and smelled like it was fished out of a bayou.

“You came all the way from the Quarter to come and see me?” She grabbed a mug from the table and took a long sip. “Bushwa.”

Darzsa could feel the indentations crease into his chin. Here he was flattering this old Trotzky with a visit; the least she could do was be happy to see him. “Bea, please. Your favorite nephew came to visit. Don’t you think you can be a little more cordial?”

Bea scoffed, setting her mug back on the table. “Aren’t you full of it today? Out with it. You need money? One of your beaus has it out for you?” She raised a brow, turning her nose up at him. “You here to raid my closet again?”

Darzsa pinched the bridge of his nose, holding his tongue so as not to burn one of the last bridges he had. “Please, darling. I wouldn’t be caught dead in one of your garish rags.” It was nice by his standards, at least. “I’m here because I wondered if I had any mail.”

She shook her head, laughing to herself. Bea exited the room, cutting through the bedrooms to the kitchen. Darzsa knew she’d be a while, so he surveyed the room, examining some of the knick-knacks she’d added since he’d last been there.

Darzsa didn’t visit often. He’d only come by once every few months, if that, to check in on his dear Aunt Beatrice. Five years he’d been on his own, his preference. He didn’t want to take advantage of her goodwill and was confident in how she raised him to be self-sufficient, unlike her niece.

Framed scriptures and pictures adorned the wall: his parents’ wedding photo; the Lord’s Prayer and Beatitudes; Bea and her siblings when they were younger; Darzsa and Daniel as kids; various cousins; and family members he hadn’t seen in years or never met. Among the old portraits was a new one, neatly squared among the familiar faces. Three young men in casual clothes and overseas caps, smiling and posing for the camera. Staring back at him were Daniel, Josiah, and a man he had never seen before.

Darzsa is very excited for his "date" with Jo. I wonder what he'll pick out to wear. We finally see the letter Daniel sent. And if you caught it, Daniel has sent numerous letters to his dear brother, but after realizing his parents weren't sending them, he sent this one to Darzsa personally.

Bea is an interesting character. I wanted to show that Darzsa isn't completely alone, though he may feel like it at times. Bea is more open to Darzsa being who he is, but there are times when it's evident why Darzsa is thankful he still doesn't live there. Who knows, maybe Bea will show up more.

An unlikely appearance of Jo on Bea's wall, and who's this man next to him? More mystery surrounds Josiah.

~Fun facts with Fox~
Doughboys were the names given to WWI soldiers. Dapper was also slang for a flapper's dad, so take that as you will.
hotsy-totsy=look good/attractive
Trotzky=old woman with chin hair
Overseas cap=old timey garrison cap before they officially got that name. These caps were worn by the soldiers coming home from France.
Bushwa=nice way of saying "bullshit."

Okay, I love Bea 😍 it’s nice seeing Darzsa around some family (that care about him). I feel like there’s a lot to unpack here 👀 this is quite the mysterious picture 🧐 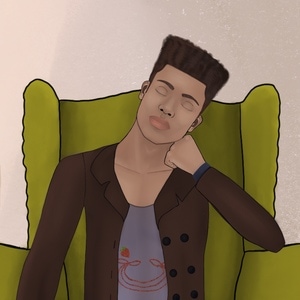