Poppy curls into a ball atop the bristles of Melody’s broom, tail tucked beneath her paws. Garnet winds around Ursula’s shoulders, comfortable. Beady eyes scan the scenery. Melody kicks off of the ground, both legs swung over one side of the shaft, ankles crossed. Ursula follows her high, high into the summer sky and, together, they head east. Wind whistles in Melody’s ears. She can almost pretend she’s on this journey alone. Blissfully alone.

Ursula clears her throat not a minute later.

“Why have you chosen to do your apprenticeship with Madame Celeste?”

Ursula shrugs, eyes cemented dead ahead. “Earth magic is one of the most useful and widely recognized crafts. Madame Celeste is the best there is and I heard she had an opening. I’ve always been interested in the art of potions and brews.”

“I have similar reasons.”

“Yes, because you have a natural talent with plants.”

The points of Melody’s cheeks bloom with heat. She swallows, willing the warmth to subside. “If anyone can help me improve, it’s Madame Celeste. You said it yourself: she’s the best there is.”

“It’s her home, Ursula. Not everyone wants to live in the city.”

Privately, the isolation of Blackberry Thicket is a concern of Melody’s, as well. She’s never been in a town not paved with asphalt and quick-dry cement, nor a place where the trees haven’t been cut down nor the rivers built over. The grassy meadow on the city’s edge is the closest she’s ever come to a place without civilization, and even then she visits it on full moons for rituals and not much else.

What if Blackberry Thicket doesn’t have a good coffee shop? An internet signal? What if there are—Hecate forbid—bugs?

“I can feel you cringing from here,” says Poppy from the back of the broom.

“I’m your familiar, Melody. It’s my job to read your emotions.”

The concrete and rebar jungle fades as they fly, hill giving way to thick forests of quivering green leaves. The air smells different out here; fresh, rainwater mixed with soil. It’s a cloudless day and the trip is a long one. Melody glances at Ursula, who sits on her broom with ease, casual confidence, while her familiar coils around her.

Garnet hisses, content, and it makes Melody uneasy, moths in her belly, fluttering around her insides.

“You actually want to work with me for three years, huh?”

Ursula blinks, glancing at Melody as if noticing her presence for the first time. “Pardon?”

“Did you apply for Madame Celeste’s apprenticeship knowing I was going to be your partner?”

Ursula stares. “Melody, sweetie. Even if I had known you would be my partner, I would never back out of this opportunity! I’m a year overdue for my apprenticeship as it is. Just because your feelings are still hurt from when we were in primary school—”

“My feelings are not hurt, I’m way over it! Trust me, I haven’t thought about it in ages.”

Ursula sniffs. “If you say so.”

The temperature drops like a heart. The summer air turns lukewarm, then cool, and wind blasts them from below. An ill-timed updraft. Ursula screeches, a hand flying to clutch her skirts to her thighs. Garnet twines down Ursula’s arm and opens her jaw, two white teeth glinting. For one wild moment, Melody thinks Garnet will bite—but no, she’s laughing. And from the back of Melody’s broom, Poppy is too.

“Garnet! The wind is so strong, why aren’t you helping me?”

“You forgot already?” Garnet hisses out a giggle. “I can’t help you during your apprenticeship, and that began this morning, Ursula, dear.”

Melody can’t help it—she snorts. Ursula battles with the hem of her dress, fighting to keep it at a decent level. With the strong gust, Ursula’s thick locks fly around her head in a manner that reminds Melody of a thousand, livid snakes.

She snorts again, hand slapping her lips to keep the sound back. Ursula isn’t fooled.

Ursula manages to wrangle the fabric between her knees, legs pressing tight together. Her mouth is just as tight, lips a thin, thin line. “Nice, Melody. Very mature. I was wrong, you’re definitely ready to make brews for real patients.”

Blackberry Thicket lies in the heart of the forest, tucked behind the eastern mountain range. The population is under 4,000, which is tiny compared to the city, where numbers fluctuate in the low hundred-thousands.

From high up, the girls spy the faint blue sparkle of ocean. It’s too far to smell salt on the wind, every scent instead fresh and alive, wet earth and potting soil, cotton caught on the breeze, pine needles.

When their feet touch the ground, it’s in the town center. A grocery store with six parking spots rests at the adjacent corner, next to it the post office with two of its own. Trees take up every inch of unpathed dirt, casting dancing shadows of refracted light on the street. A few cars sputter past on their way to the rows of townhomes they’d spotted on the descent, and from up the quiet road a woman appears, holding a basket overflowing with sweet-smelling jewel mint that tickles their noses from here.

The first thing Melody notices about Madame Celeste is her eyes—ragwort-leaf green, bright as a stream in morning light. Kind.

The second is her height. She’s tall. Well over two heads above them. Melody glances down to credit the height to heels, but no. Madame Celeste’s mud-splattered bare feet cross the cracked asphalt with ease. Her smile is painted petal-pink and her cheeks are splashed with freckles. She’s not a day over forty.

“You two must be Ursula and Melody.”

“Y-yes, ma’am!” Melody stands to attention, nigh dropping her luggage on Poppy.

Ursula springs to Melody’s side. “Nice to meet you, ma’am! We’re very pleased we’ve been given the opportunity!”

Madame Celeste chuckles and pushes the basket into Ursula’s arms. “Glad to hear you’re ready to work hard. Welcome to Blackberry Thicket, girls. I’m delighted to have you.” 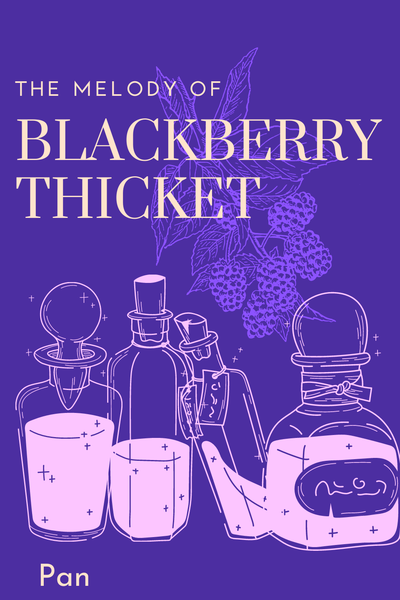 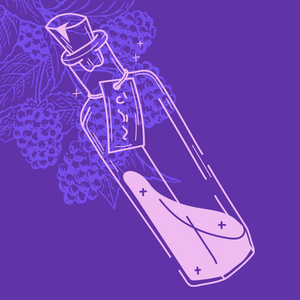