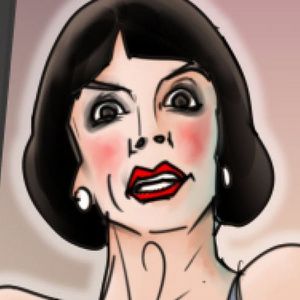 Ignatious Fluke is a reincarnation many times over. Again and again, he is forced back to learn the error of his ways. His name is a composite. ‘Ignatious’ was from the time he was a monk and the surname ’Fluke’  derives from a stint as a dog.
As a returnee, springing back to this earthly stage, Ignatious has one unifying theme run through his past lives. It manifests as a low level, type of creativity, not dissimilar to graffiti.
His work is often in grey tone because as he says, he ‘doesn’t wish to dignify his trash out put any more than necessary’.
Regarding a subject, he has a deep aversion to any god/angel/biblical reference. Also, Super/ hero/sport/cute/furry/whimsy/ sword/sorcery/historical/animals or Anthro shite - He has never done porn or even capable of eroticism, although he is often very lewd and rude with irony featuring heavily in his back catalogue.
Words that ‘trigger’ Fluke’s displeasure are ‘ cool’ and ‘awesome’ Of an anal disposition, he keeps count how many times they are used and by whom.
Fluke does not entertain commissions. He is a voluntary Artist, and therefore may be a complete and utter arsehole in response to requests, but is courteous at all times.
Thank you for reading.

No messages or posts yet