Mongoose & Son Publishing is home to Junior Citizens & The Odyssey of Benedict Arnold.

Please check it out https://mongooseandson.com

Whoah, it's been a little while!

As for the absence, I've been working away silently over a brutal winter, getting more story together and doing more reading for the Odyssey of Benedict Arnold. But that's for later chapters!

In the meantime, I've been preparing a collected volume of the first 4 chapters. Here's a little mockup of the book that I'll be printing for TCAF 2022. More details on that as June 18th approaches.

But what of the online version? Well, I'm back to posting new chapters starting May 2nd! This will be the start of Chapter III and you might get to confirm where/when Arnold ended up at the end of that shark chase into a coat closet.

Until then, stay well, thank you for reading, and see you shortly! 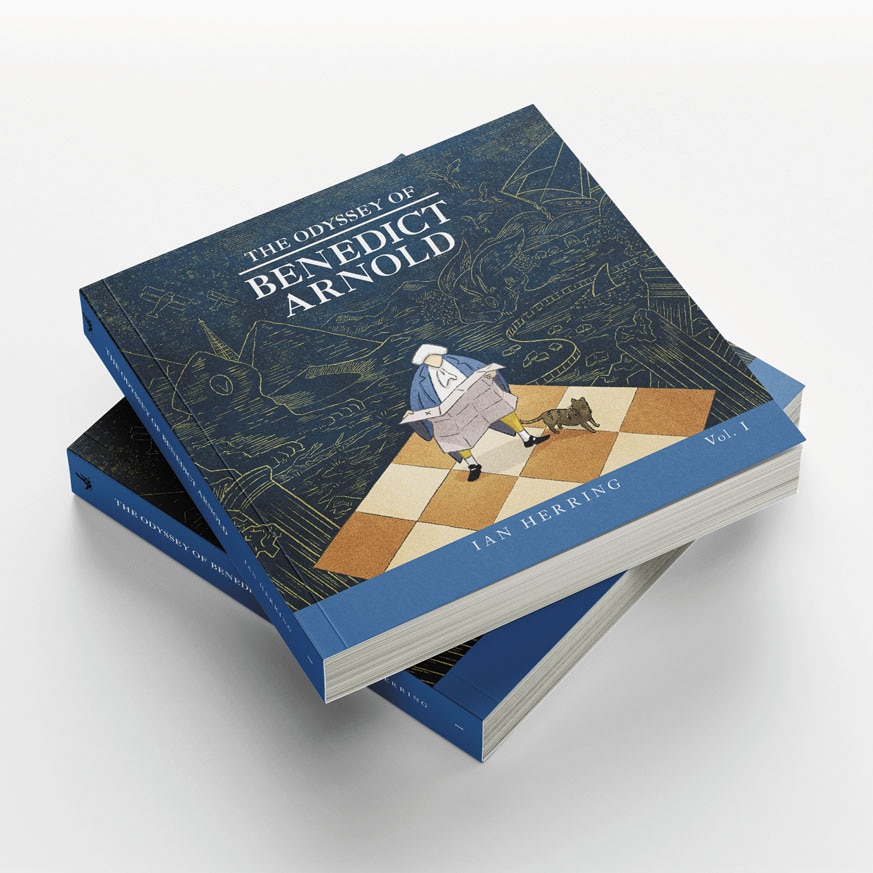 With Chapter II complete, The Odyssey Of Benedict Arnold is going on pause starting December. Looking to be back very soon!

In the meantime, if you're interested in more of my stories please check out "Junior Citizens", the Sci-Fi Comedy that I drew and co-wrote. Available to read fully on Tapas!

Wishing you all a good December and a great start start to 2022! 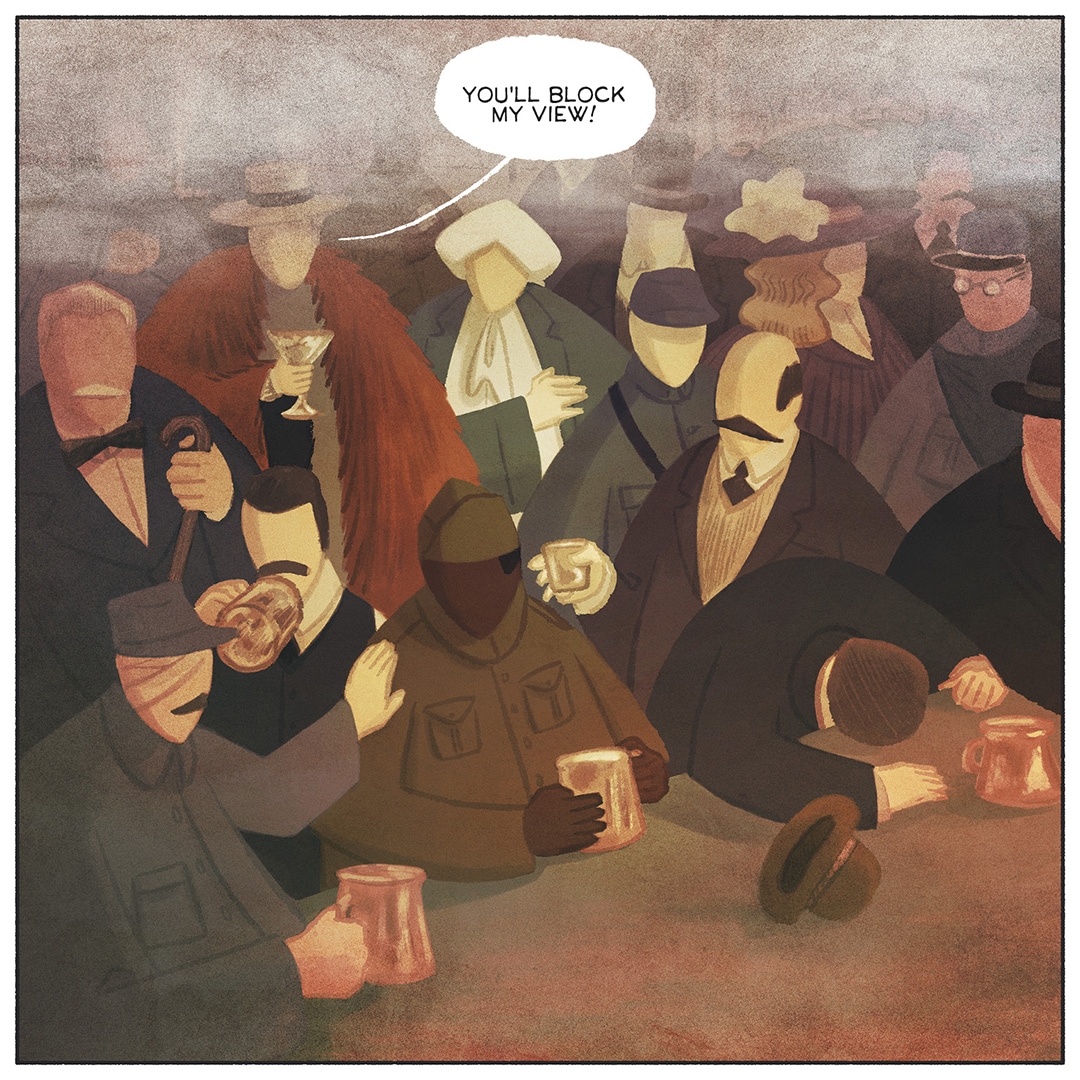 Thank you everyone for reading so far.

This concludes part i of Chapter I! The Odyssey of Benedict Arnold will be back on July 2nd for Part ii! I know the format is a little different/slower than a lot of other web comics and thank you for your patience.

The 12 pages a month was done to keep pace and hopefully avoid any long hiatus. Currently wrapping up the 144th page so there is at least a full year of updates ahead without a break!

See you in July with more Benedict Arnold! 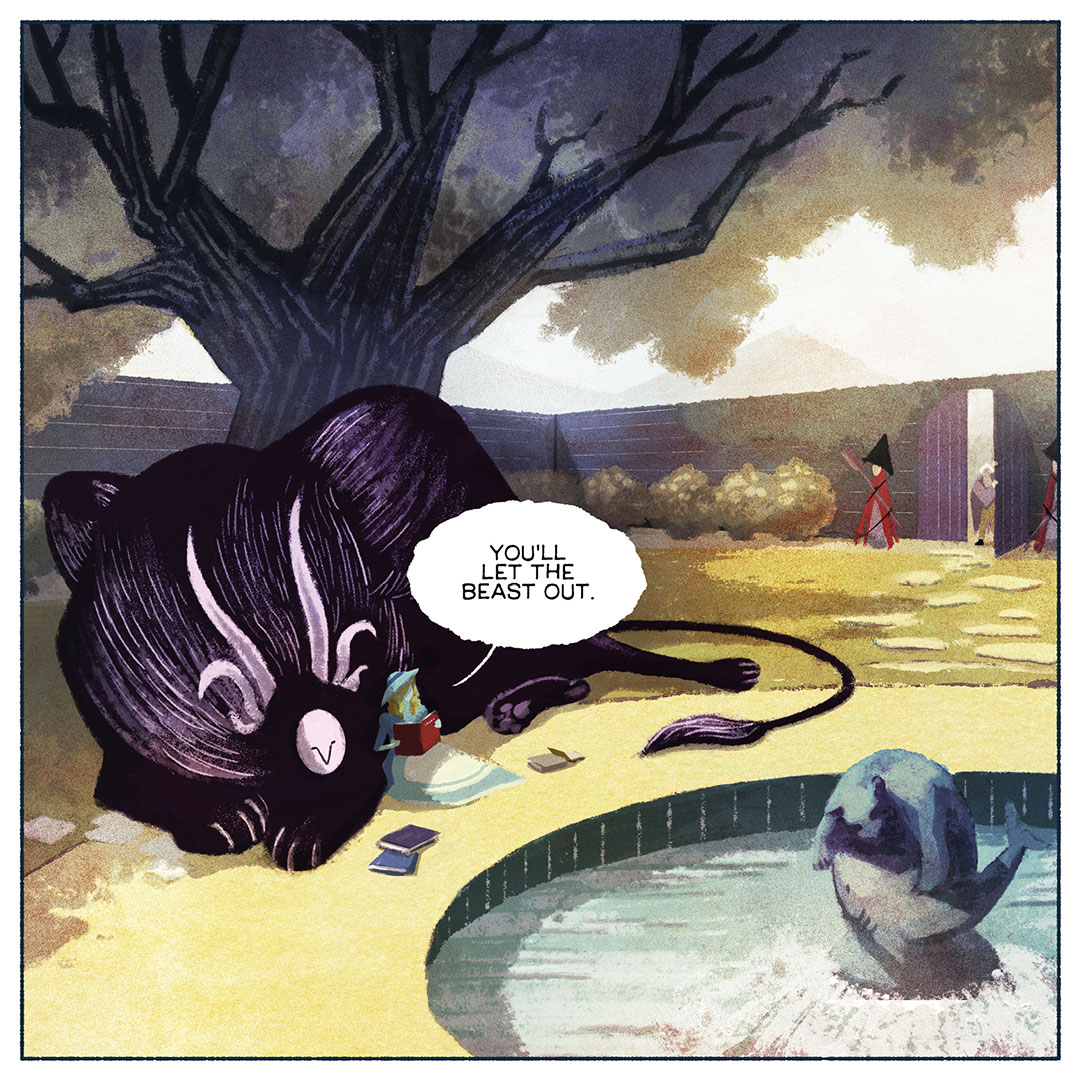 Here's a little excerpt, that is probably more legend than true, of Arnold requesting his old uniform in his final moments of regret.

"It is told that at the approach of death, he asked, as he sat in his chair, to have his old Continental uniform brought out, - the same in which had so bravely fought the battles of his native country.

The coat was put upon his shoulders, and he looked around and surveyed his appearance with a strange mingling of emotions.

While thus enveloped in the insignia of a glorious and successful Revolution, and no doubt smitten with remorse at the thought of the crimes for which he was answerable, - alternately toying with the honored uniform and deploring the depths of infamy into which he had plunged himself, - went to another world.

His old uniform was his winding sheet. He had lived both to honor and disgrace it. It was time the end had come."

Story is moving along, 1 page at a time! Check it out if you'd like to follow along. 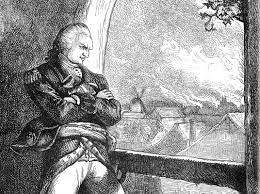 The Odyssey of Benedict Arnold starts today on Tapas! New page every other day, 2nd to 24th of every month. Might want to let a few build up before reading them, currently have enough pages to take this series to May 2022 but going to keep adding! 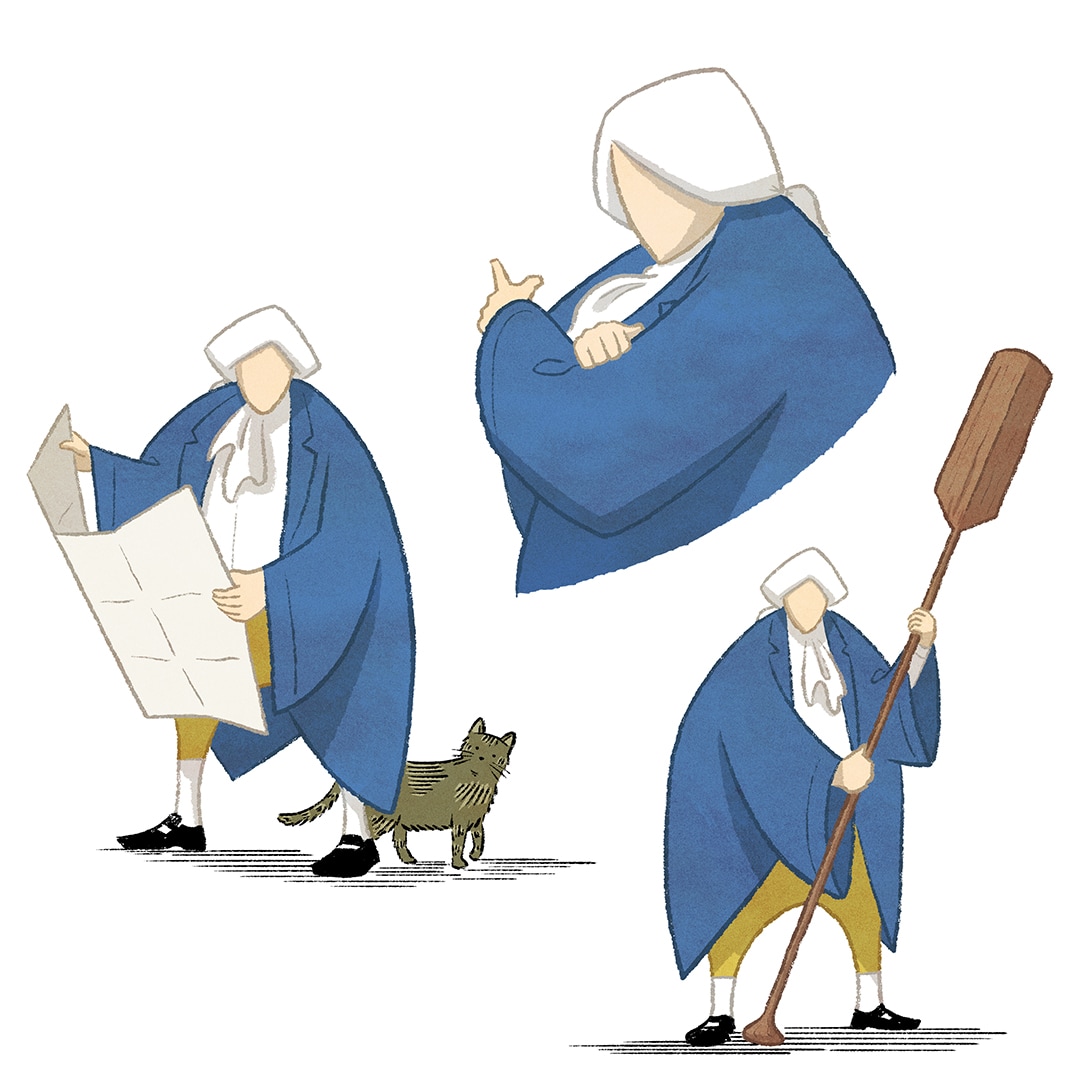 Ian here, and I'm starting up a new project and comic series! It will be showing up on Tapas, Webtoon, & Tumblr in June but for now... I'll be offering it at TCAF 2021 as a Mini-Booklet and through Ko-fi support!

What's the comic you ask? It's called 'The Odyssey of Benedict Arnold!

"‘The Odyssey of Benedict Arnold’ is an ongoing adventure tale following the infamous traitor, Benedict Arnold. Washing up on the shores of an unknown land, Arnold is plagued by voices detailing his life and all that has been said of him since his act of treason, true or otherwise."

The story mixes in history, adventure games, and mythology to weave through countless locales and points in time. Along the way, I hope to shine some light on things you may not have know about the world's traitors including some of the less plausible things that tend to creep in overtime.

Been working on this for some time and as of writing this, there's 120 pages set! (Using the lessons learned from Junior Citizens to hopefully avoid downtime and gaps in posting.)

Releasing 12 pages a month online, first through Ko-fi via subscriptions/donations, then gradually everywhere! Keep an eye on mongooseandson.com/benedictarnold for details!

As always, thanks for reading and hope to see you in June! 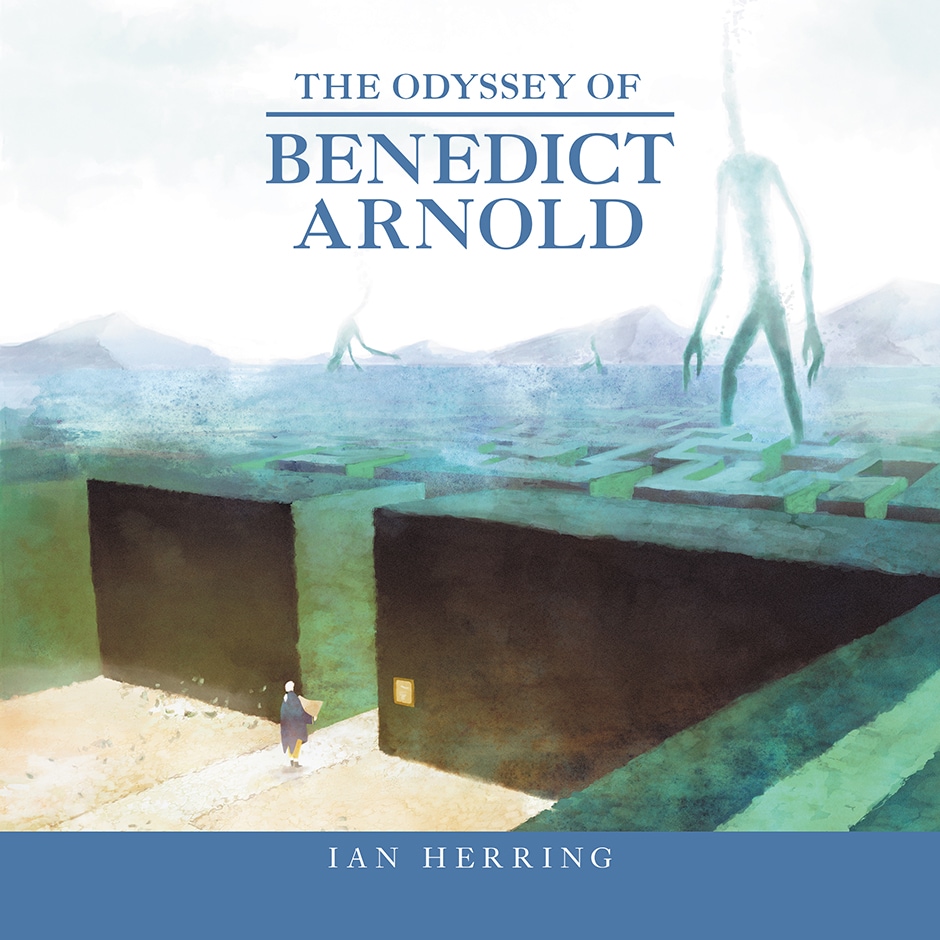 It's been a little while but wanted to share an illustration that's semi-Junior Citizens related.

"Liu & Ruttiger taking in some cinema. Inspired by Toho's Battle For Outer Space and Germany's Perry Rhodan no.20! Both of which I should be looking into more beyond the music and the covers..."

Doing more posts such as these on our instagram account @juniorcitizens if you're curious to see more frequent updates. Including the "2020 Junior Citizens October Picture Quota"! (...Inktober...)

Also of note, the Tapas account's name has been changed to Mongoose & Son. This is with the idea of putting out some new work later this year that is currently being worked on but unannounced... stay tuned!

Thank you for reading and wishing everyone a good start to the New Year.

This one is probably familiar...

This one was done sometime after the first chapter and set the tone for the rest of the paintings.

The last cover, which is actually the first one that pairs up with the finale and the epilogue, launching tomorrow! Hope to see you there as Junior Citizens wraps up with 142 pages!
Thank you everyone for reading thus far and we'll see you tomorrow! 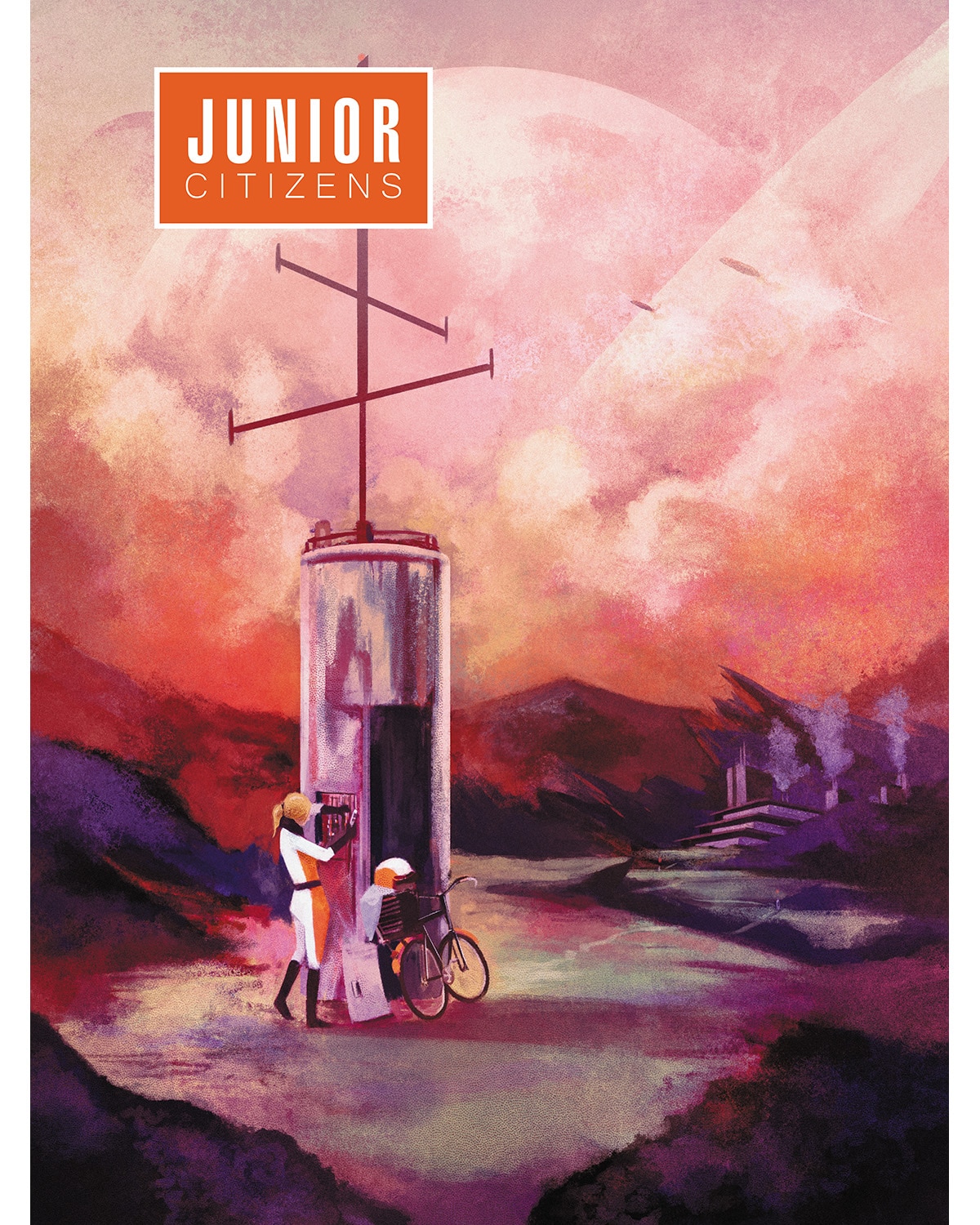 The Konstantin-Artsutanov Memorial Exospheric-Elevator (K.A.M.E.E) is the star of our 5th chapter, Elevator Pitch. Situated in a crater-lake on the top of a dormant volcano, it's not in the best shape these days... Mind the birds.

Watched this weird documentary about Space elevators when working on this chapter. Neat stuff!

Last of the new paintings, our final cover is up tomorrow, then it's the finale! Thank you for your patience and hope you enjoy this rendition of Elevator Pitch! 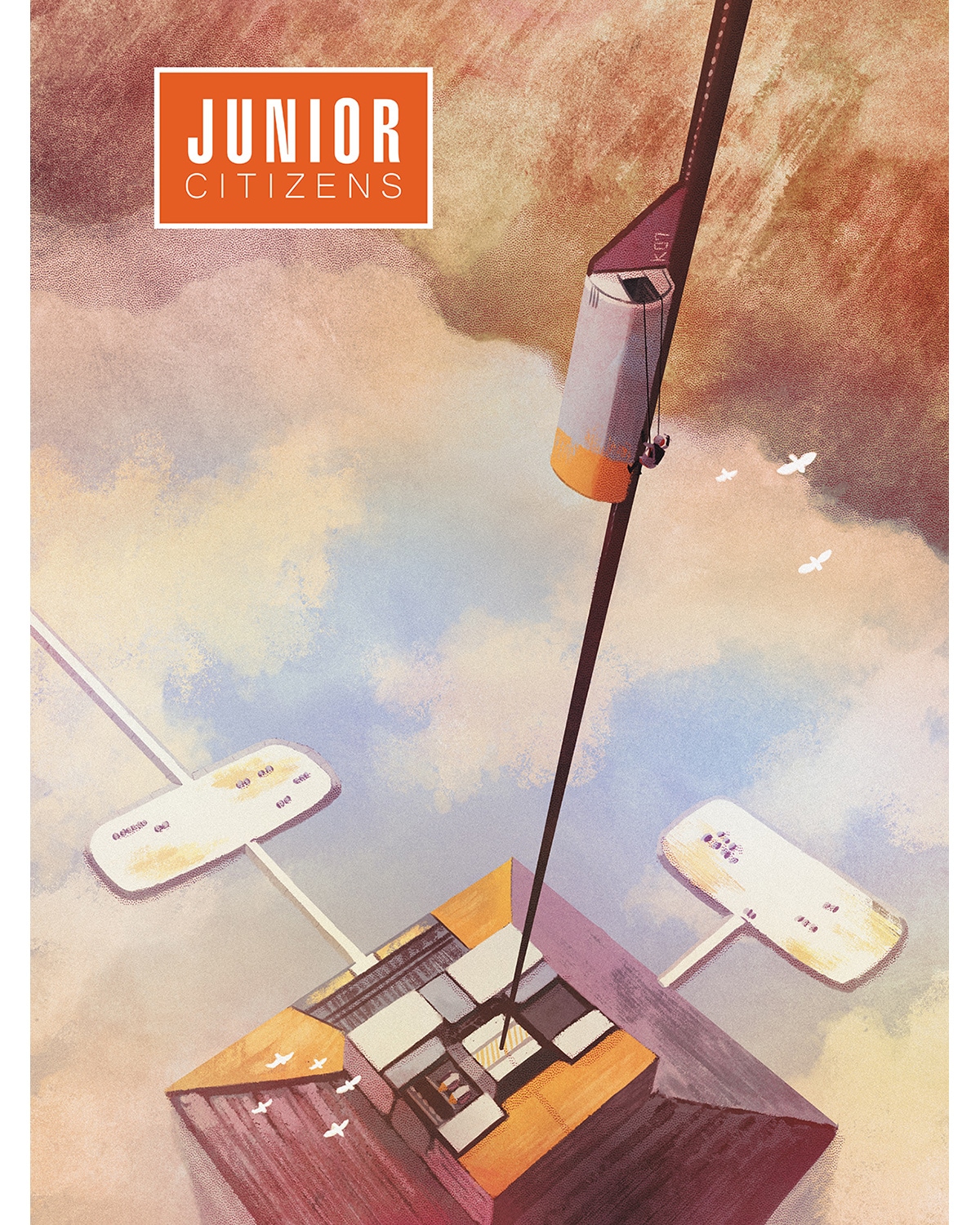 Rusting hulks of machinery in a swamp. Inspired by the abandoned factories of the U.S.S.R. and the French WWI tank-model, Char 2C. These weapons got a little too big to be useful... Rounding out Chapter 4 with this new painting!

Junior Citizens has been approved and we're ordering a copy before opening it up to distribution to OK the quality. Will share details once that arrives. Should ideally be in a week or 2, depending on shipping speed that may be altered by COVID-19. Stay tuned! 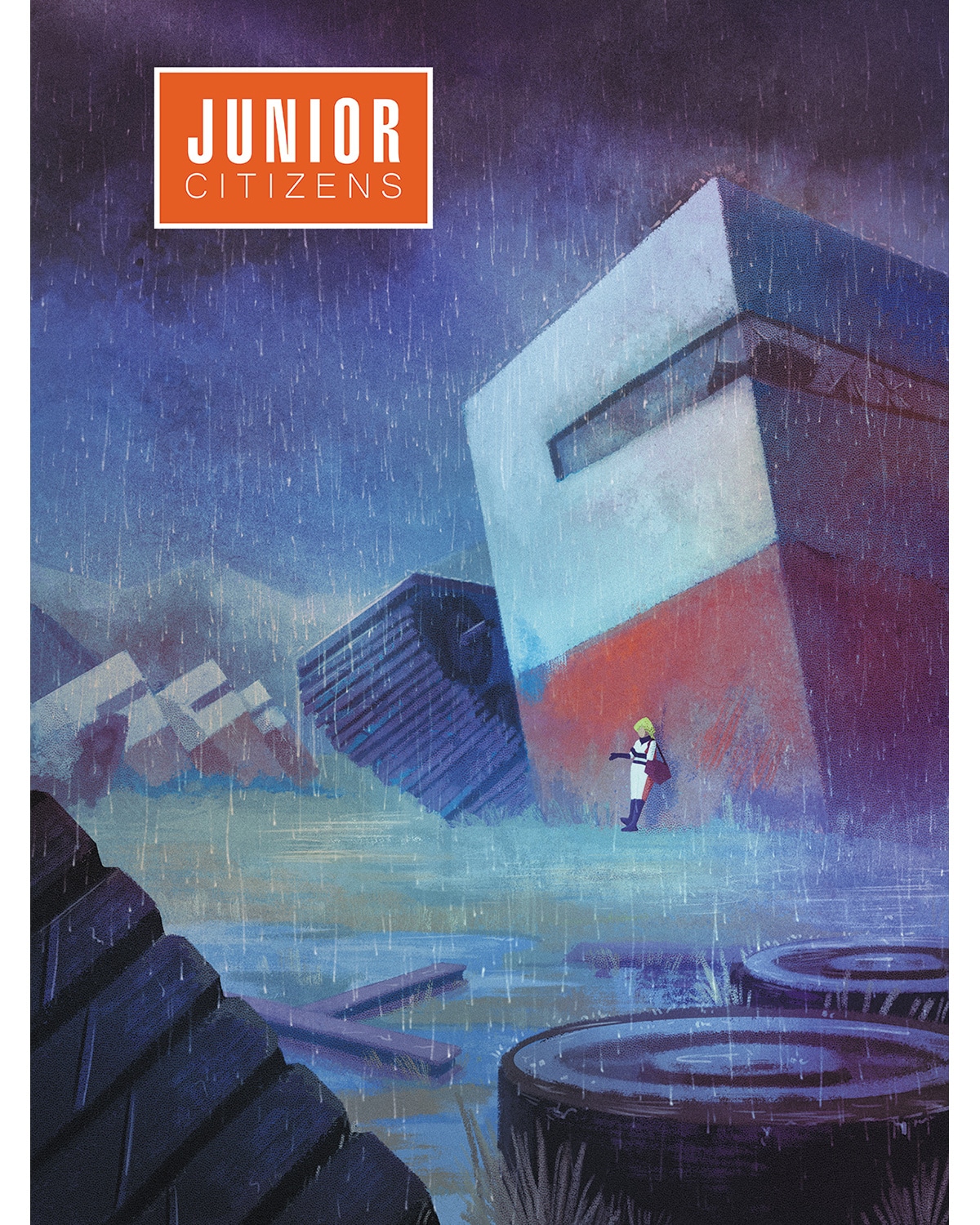