Taeyong marched back to the black marble counter, grabbing one of the five pregnancy tests laid out, staring at its tiny screen.

“What if I actually have some disease and I’m wasting away right before your eyes?”

“We should go to the hospital.”

“Taeyong,” Daehyun said, holding his hand out as he leaned against their porcelain tub. “It’s been thirty seconds.”

“Thirty seconds?” Taeyong gasped as he took Daehyun’s hand and stood in between his legs, as Daehyun wrapped his muscular arms around his waist.

“You need to relax,” Daehyun said in his low, calm voice. “You’re fine.”

Taeyong hummed as he brushed Daehyun’s hair back; the hairs falling out of place, softening his sharp, alpha features.

“I know,” Taeyong sighed out. “But if I’m not pregnant, we’ll have to wait until my next heat.” And six months from now was considered an inauspicious time for him, according to his New Year’s reading.

“You know we don’t have to wait,” Daehyun smirked and leaned up, nuzzling Taeyong’s jaw, nipping it. “I can get you pregnant anytime.”

Giggling, Taeyong squeezed his arms, leaning into him. Since Taeyong got off birth control, the sex the past few weeks, even outside his heat, had been something else.

There was a sudden banging on the door. “Hyung! What’s the result?”

Taeyong jumped back and pressed his hand to his chest. He frowned and marched to the door, swinging it open.

“What are you doing here?” He asked, staring down at Seunghyeon. Though, to his surprise, Myungsuk stood beside him, both brothers looking up at him curiously.

Seunghyeon shrugged and crossed his arms. “We wanna know if you’re pregnant or not.”

Taeyong’s eyebrows shot up. “How—” He pouted and leaned in. “How do you know I’m checking?”

“You dropped the receipt on your way up,” Myungsuk confessed, pulling out the convenience store receipt from his hoodie pocket.

Sighing, Taeyong pushed the door open and walked back to the counter. He glanced over. Still nothing. He turned around, leaning over the edge. “It hasn’t been three minutes yet,” he said and placed a hand on his stomach.

Seunghyeon padded over, leaning beside him, chuckling when he noticed the pregnancy tests lined up. “Did you seriously take five tests? Like in one go?” He laughed. “You’re so weird. Doesn’t each box come with two? Why not just take the sixth one too,” he teased.

Taeyong rolled his eyes and smirked. “I left the last one for you.”

Seunghyeon pursed his lips, and Taeyong stifled a laugh. “That’s so rude. You know I’m careful,” he said and let out a sigh, waving his hand. “Besides, this year, I’m going to be good.”

Seunghyeon sneered. “I have self-control.”

“Both of you. That’s enough.” Daehyun scolded.

Taeyong bit his lip and hung his head. Though, he flicked his eyes at Seunghyeon and nudged him.

Myungsuk leaned against the tub next to Daehyun, rubbing the edge of his fingers together. “Are you excited, Hyung?”

"Me too. But only because it's your baby," Myungsuk scrunched up his nose. "I never want kids."

"You say that now," Daehyun said and turned to Taeyong, smiling at him, his eyes full of love. "But wait until you meet the right person."

Biting his lip, Taeyong’s sweet, citrusy scent wafted through the bathroom. After two years of a honeymoon love, they were both ready to take the next step.

“So a plus means you’re pregnant and a minus means no, right?” Seunghyeon piped up, holding one of the empty boxes.

“Don’t call it that,” Taeyong said, snatching the box.

Seunghyeon shrugged. “Does that mean they’ll take one of us away if it's a minus?” he teased.

“Yeah, they’ll start with the youngest,” Taeyong teased and they turned to Myungsuk.

Myungsuk turned away from Daehyun and tilted his head at them. “What?”

Taeyong and Seunghyeon sniggered. “Nothing,” Taeyong said and continued giggling with Seunghyeon. They loved Myungsuk enough not to keep him in the dark.

He glanced over his shoulder, the screens staining blue as the ink started to react.

“Can you two wait outside,” he suggested softly to Seunghyeon. He shuffled his feet. “I want Daehyun to be the first to know. Sorry.”

“Yeah, sure,” Seunghyeon said and tapped Taeyong’s shoulder with his fist. “Don’t apologize. I get it.”

Seunghyeon nodded, pushed himself off the counter and held his hand out. “Myungsuk, let’s wait outside.”

With a frown, Myungsuk looked over at Daehyun and Taeyong before obliging and following Seunghyeon out of the bathroom, closing the door behind him.

“And then there were two,” Taeyong hummed.

Taeyong bit back a grin and blew him a kiss. “Five technically. With all of us in the house.”

“Ah yes,” Daehyun nodded seriously. “I should consider this child my third,” he said and chuckled.

Daehyun took both of Taeyong’s hands into his and brought them to his lips, kissing his knuckles. Taeyong purred and traced Daehyun’s smooth cheek with the tip of his finger. He waited so many years for this moment. For Daehyun to look up at him with complete adoration and Daehyun’s mark permanently embossed on the back of his neck.

“You should check now,” Daehyun said in a soft voice, loosening his grip.

Nodding, Taeyong pulled back and walked over to the counter. He took a deep breath, picking up one of the tests. He could do this. It wasn’t the end of the world. Gulping, he looked down.

Daehyun pulled him into a tight hug, squeezing him. Taeyong closed his eyes and held him back.

Daehyung cupped his cheeks. A wave of calm and love overflowed through him, his face breaking into a huge grin.

“We should tell Seunghyeon and Myungsuk,” Taeyong said after a while. Daehyun nodded and Taeyong rushed out the room, his stunned surprise replaced with triumphant giggles. “I’m pregnant!”

Gasping, they sprang up and enveloped each other in a tight hug. Taeyong nuzzled the tops of their heads as they nuzzled back wherever they could, their omega pheromones and giddy laughter filling the room.

“Congratulations, Hyung,” Myungsuk said as he pulled away, sucking in a big breath of air.

Daehyun wrapped his arms around the three of them, Taeyong leaning back against his chest. “I know,” he breathed out. Grinning, Taeyong placed his hands on his cheeks, his mind whirring. “Oh, goodness. There’s so much to do,” he gasped. “We have to tell our parents. And I should make an appointment with my doctor right away. We’ll also need to hire a nanny. Oh, I’ll need to hire more people for the cafe.”

“Are you serious,” Seunghyeon scoffed and sat back on the bed. “Just enjoy the moment. Think of all the fun stuff. Like making the guest room a nursery.”

“And all the baby clothes you get to buy,” Myungsuk pointed out, sitting next to Seunghyeon.

“And get a reading for the baby,” Taeyong added, placing his hands on his chest. “And have a baby shower. And it’ll be over the top!” It’ll be way better than Jaejin’s for sure. Worthy of the Kim family.

“You seem more excited to be pregnant than having a baby,” Daehyun said.

“No,” Taeyong whined. “That’s not true.” He tilted his head back and kissed Daehyun’s cheek. “I can’t wait to have this baby. And take care of them and love them and,” he trailed off with a sigh. “I just want to be a good parent.”

“You’ll be the best parent,” Daehyun purred against his ear.

“We’ll be,” Taeyong corrected and giggled when Daehyun nuzzled his ear.

“Right.” Seunghyeon slapped his knees and stood up. “We should probably go to sleep,” he said and covered his mouth as he faked a yawn. “Come on, Myungsuk.”

“But it’s not late,” Myungsuk said, leaning over to check the clock on the side table. But when he saw Seunghyeon’s stubborn face, he got up too. “I guess I’ll go too. Goodnight, Taeyong-Hyung. Daehyun-Hyung,” he said and followed Seunghyeon out of the room.

Taeyong pulled away from Daehyun and followed them to the hall, hanging on the door frame. “Seunghyeon. Can you ask some of your friends if they need jobs? I’m serious. In general, we need more staff.”

Seunghyeon sighed and ran his fingers through his bleached hair. “I’ll ask.”

“Thanks,” Taeyong said. “Goodnight, you two.”

“Goodnight,” they said in unison and Taeyong watched them walk down the stairs into the main living area of the apartment before being pulled back into the room.

He spun on his heels and grinned as he was pressed against Daehyun. Reaching up, he pressed his forehead against his, taking in the musky warmth of his scent. “Finally, we’re having a baby.”

Daehyun nodded and silently held him close. Resting his head on his shoulder, his heart thumping calmly against his ear. Taeyong looked out the window at the Seoul skyline, sparkling against the night sky.

He’d made it. And now he had a baby to prove it. 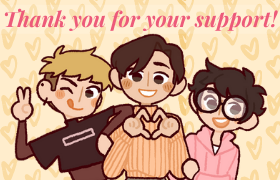 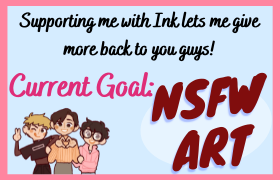 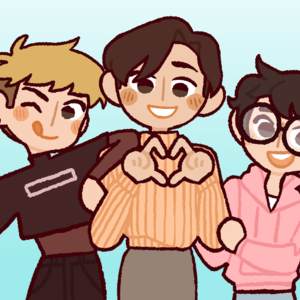 Thank you so much for reading 3 Paths to Love and I hope you stick around for not only Taeyong's but also Seunghyeon's and Myungsuk's adventures too!

They’re so sweet!! ❤️ Everyone should always cram into a bathroom for exciting news 🙈 clearly it’s more fun that way 😁 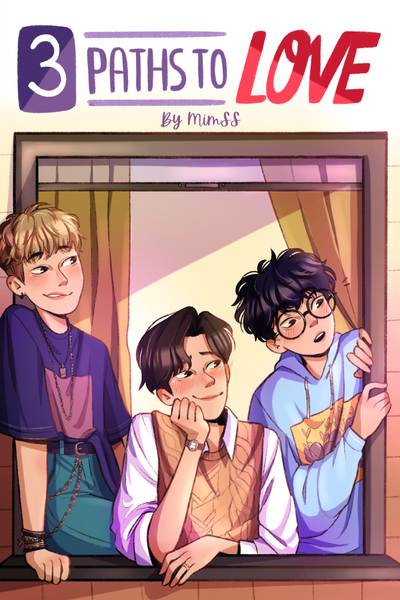 Three omega brothers, Taeyong, Seunghyeon, and Myungsuk, set out to navigate three very different life stages. Taeyong saving a marriage, Seunghyeon opening his heart, and Myungsuk learning what it takes to be happy.

They each embark on their own love stories with three exceptional people: Kim Daehyun, Nam Kwangsun, and Cheung Insoo. 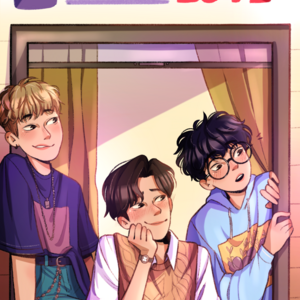