Beautiful Wish ("To Be Beautiful" Rewrite)

"How was your day at school today?" Sarah's mother asked, preparing dinner.

Ugly! Disappointing Why are you even staying there, you're lonely. No one really likes your look.

Without control, Sarah started crying. Every day had been like this ever since she started her Sophomore year, everyone was bullying her. They were saying that she looked bad. Why? Sarah always thought. What was the thing that kept people insulting her?

“I had a bad day.” Sarah responded.

Her mother sighed. “Every time.”

“Mom, it’s not my fault. I just don’t understand…”

“And maybe you never will.” Her mom said, which disturbed Sarah enough for her to leave the living room.

In her bedroom, Sarah looked at herself in the mirror. She had a big nose, yes, but she thought it made her a bit cute. Sure, she gained a tiny little bit of weight, but Sarah didn’t mind too much (it was barely visible). Yes, she was flat, probably not that attractive nor tall or whatever guys are into these days but was it really a problem? Why were people so focused on her look? Did they just want to make fun of her in some way and decided to hit her appearance? But then, that wouldn’t be possible, since some of those people don’t even know each other… Right? As an attempt to forget about her bad day, Sarah decided to focus on her homework. Reading a chapter of a random book they got. Great. Sarah tried her best to keep attention to the book, but her thoughts kept distracting her so much. Eventually, Sarah threw the book across the bed in frustration. Luckily, as in perfect timing, her phone rang. It was Abby, her only friend. Abby was a nerd type of girl, red headed, wearing glasses and some kind of secret genius, but she was a genuinely good friend to have. Sarah was happy that at least one person actually cared about her current school problems.

“Not great. How about you?”

“Oh, well homework’s been killing me. I wish I had more time for my actual future!”

“Say, do you want to do some shopping tomorrow afternoon? It’s Wednesday so…”

Sarah hesitated a little. If her look was that big of a problem, maybe she could somehow improve it? With new clothes? No, that sounded a bit wrong. It’s either going to be a hit or miss. “Worth a try, I suppose.”

Abby made a small gasp. “Really? Didn’t thought you would agree. That’s cool!”

“Okay, I have to finish those stupid homework. See ya!”

“See ya.” Sarah said before Abby hung up. Guess she’ll do a shopping trip with Abby.

Sarah was at school, looking inside her locker, grabbing some leftover cash. Of course, some people were mocking her from behind. It was extremely annoying but she was trying her best to avoid them.

“You don’t look like you’re in a good mood.” Abby approached her.

Sarah nodded and closed her locker. Abby was looking at her closely, that’s when she realized that Sarah… Was slowly getting worse and worse every day. “Do you have depression?”

Sarah got surprised. “N-No… I don’t think I have… D-Depression.”

“Hey, look who it is!” Some bully said in a distance, pointing at her. Sarah opened her locker again to pretend being occupied. She wanted to ignore him. “You know what you’re reminding me of?”

Shut up.  She thought but didn’t have the courage to say it out loud.

Some of the bully’s friends laughed, some others were actually… turning against him. This never really happened. “Nate, buddy, don’t you think you’re going a bit too far?” One of his friends asked.

“Nah. What do you think she’ll do? Cry like a baby, I’m telling you that.”

“Hey, leave her alone.” Abby approached Nate. “She’s already going through a lot, so stop being-”

“Being a what?” Nate got closer, trying to look like some kind of menace to fear.

“A dick.” Abby’s tone has gotten extremely serious extremely quickly. “I know what I’m saying, I’ve been through this too in the past.”

Sarah looked at Abby. This was probably the first time ever that someone actually tried to stop a bully. However, without noticing, a small tear appeared on her left eye, which Nate noticed.

“Yeah, listen to Tom for once.” Abby followed.

“Huh, where is she?” Another one of Nate’s friends, Emma (aka one of the most popular girls at school, “obviously”) asked.

Abby turned to look at Sarah’s locker. She wasn’t there anymore.

As she got out of school, Abby started walking towards Sarah’s home. She was getting fixated on Sarah though. The situation was definitely getting worse, and it might actually become very, very dangerous. If only a miracle could happen to her.

Her home was in a small street on the city, often called a dump due to being right next to, well a dump. The good thing with the street is how easily you could find some rare or useful stuff, due to the dump. It was also pretty quiet and calm, which was rare these days! The bad thing, however, is that it was always mentioned just because of the dump. Most people living there are getting annoyed by this. And the smell was something else. If you lived there ever since you were born (like Sarah and Abby), then it’s fine. If you’ve moved there, it’s a whole other story.

Abby always loved the dump though; it was so interesting to find some old school lost items. It was like she was a pirate trying to find a treasure, like those old movies she and Sarah watched as little kids. “Sarah?” she called as she arrived In front of the entrance. Sarah’s house was small but charming is a way.

“Oh, she’s in her bedroom. I tried to talk to her but she doesn’t want to.”

“I have a tight schedule most of the time but I’ll try.” Abby reassured her.

Abby got to Sarah’s bedroom. “Sarah?” She knocked the door. Surprisingly, Sarah opened the door.

“Hey.” She said, definitely tired and in a terrible mood. “Come in.”

Abby got inside and closed the door. “I missed that room.” Abby admitted.

“I can see that. I’m sorry, but the way. About the whole fleeing like a baby.”

“You don’t have to be sorry about that. I understand your problems.” Abby explained while looking around. “Oh, you still have your toy box!” She said, sitting down and opening it.

“It has all of our childhood memories; I’ll never get rid of it.” Sarah said. She felt a little bit better, talking about a subject she actually liked.

Abby grabbed some stuff here and there. “Oh, there’s our old pirate movies.”

Sarah giggled. “Yep. It’s been years since I’ve opened this, I totally forgot these were there.”

“Mm, where are my Barbies?” Abby asked with an ironic intonation.

Sarah laughed a little. “Dude, you tortured them! One got shaved, another got green hair with a Magic Marker to look like a cheap crazy supervillain and another lost her head!”

“Well, I’m something of a scientist myself.” Sarah said, having the same ironic intonation. “I remember how I accidently pulverized one of my dolls with mustard.”

Abby laughed out loud. “I remember!”

Sarah did the same. They were already having a way better time. Sarah sat down on her bed and started thinking. “I really wish there was a solution to my problems.”

Abby stopped laughing and sat next to her. “One day, there will. One day.”

“Don’t mention it.” Abby said before sitting up. “So, shopping time?”

At the mall, the two girls approached the big clothes store. This store was huge and had tons of variety. It was the perfect place for literally anyone to get in for clothes. “Don’t be nervous, it’s going to be fine.” Abby said.

“Hopefully anyways.” Sarah said, trying to smile. The first thing Sarah tried on were some jackets. Maybe I could hide my body shape with one, she had thought. At the testing booth, Sarah tried on a red, fluffy jacket.

“What do you think?” Sarah asked.

“It looks cool but not really for casual purposes. No offense, of course.” Abby said.

Sarah then tired on a simple, grey jacket.

“That looks fantastic on you!” Abby admitted.

But Sarah definitely wasn’t feeling the same. “It doesn’t fit me.”

Abby approached her. “Hey, we went to shopping for fun, not to find a cure to your physic. You do look good, and you know it, but I’m really starting to feel like your thoughts are becoming… Way worse.”

Sarah looked at her. “They are.” She admitted. “They are…”

“I have to go.” Sarah said, removing her jacket and walking away. Abby told her to come back but she didn’t listen.

Sarah stopped at the dump. Her whole life has been garbage, she might as well stay with garbage. Sarah was walking around, entirely bored and demotivated. This needed to stop! In frustration, she started kicking some of the trash. However, she stopped. Something caught her attention.

In one of the big piles of garbage, a white hand was hanging out from what seemed to be a broken window. But it wasn’t a white human hand. More robotic, clear white. Intrigued, Sarah approached it. Yeah, it was definitely not human. It seemed life-sized though. Sarah touched it. It was a bit of a mix of metal and plastic, a little strange. Sarah noticed that the hand was blocked inside a truck. A heavenly dented, old and dusty truck that almost didn’t look like one now. Trying to open the truck’s door was pretty much impossible. Sarah peeked inside of the truck, only to see a bunch of junk which prevented her from seeing the full… Robot? She still wasn’t sure if it was just a hand or an actual robot.

Luckily, next to the truck, a crowbar was there. It almost seemed like the robot needed to be free. Picking it up, Sarah tried her best to break open the door. Come on, you got big arms, use them! She thought, looking at them. Some people didn’t like them but she thought it made her stronger.

And apparently, they do! The door busted open, despite breaking the crowbar in the process. The hand was indeed attached to a full arm which was attached to a hidden body. Sarah grabbed the arm and pulled it out.

It was a robot, but not one Sarah expected. It was… Gorgeous looking. Very thin, well dressed, tall, attractive. The robot was built to look human and it was very well made. It had humanistic proportions and humanistic features such as lips, fingernails and more. The outfit the robot was wearing was a very big and long red dress and a red tank top, all with a star pattern. The robot’s hair was very realistic looking and also red, forming two unique pigtails. Finally, the robot had big green eyes and small red round cheeks. 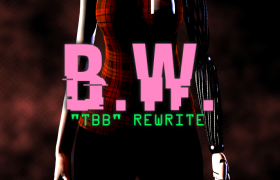 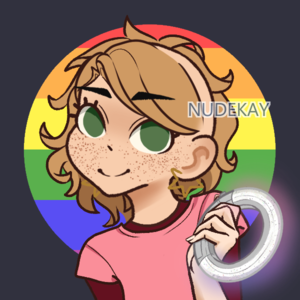 My own version of "TO BE BEAUTIFUL", the second story of the Fazbear Frights series. THIS IS NOT MEANT TO BE A "FIXED" VERSION.
Spoilers ahead, obviously.
Description:
Wanting to stop being bullied because of her look, Sarah makes a wish to become beautiful, not aware of the cost she paid. 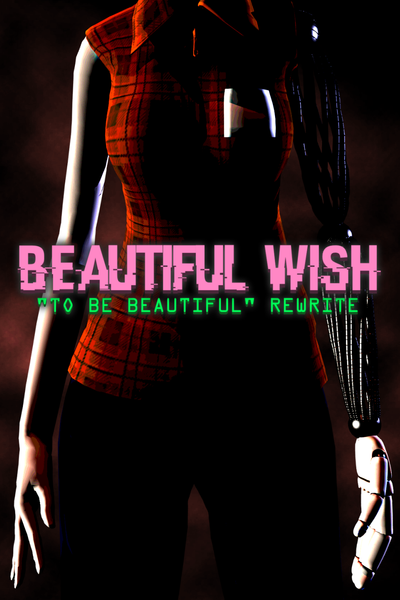 Beautiful Wish ("To Be Beautiful" Rewrite)

My own version of the story "To Be Beautiful" from Fazbear Frights #1 "Into The Pit". This is NOT meant to be taken as "fixing the story", it's just my own interpretation of the concept of it. Warning: spoilers from the original, obviously.
Artwork credits: Sarah Model by me on V-Katsu, Robotic arm by Chuizaproductions on Blender 2.79.
Subscribe 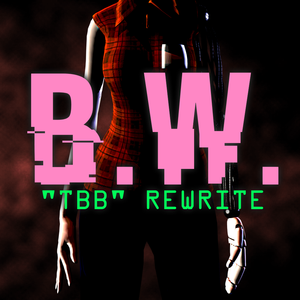