Javad was used to the other boys in his village of Lemce mocking him. But that didn’t mean he would ever let it go. His ribs ached from their blows, and his face stung. But he’d returned the favor enough. He’d been outnumbered three to one, and they’d lost their taste for this fight.

But they knew that words could hurt as well as blows. The biggest of the three scowled at Javad. “Serves you right for being arrogant. You talk real big for a farmer’s kid. How could you ever become a man-at-arms? You can’t even beat us. Don’t you know that a man-at-arms has to fight all the dangers of the frontier? The hybrid monsters or the orcs of the mountain? Bet you don’t even know what an orc looks like.”

“That’s how it is. Take it up with your father, not me.” The leader spit on the ground between them and turned to leave.

Javad, covered in bruises and dirt from their scuffle, couldn’t get the other boy’s words out of his head. It wasn’t the part about working on his family’s farm until the day he died. That was a reality he was well aware of. The quip about never even seeing an orc stuck with him. It had been years since the last war, which the orcs had lost. Now they stuck to their mountain and the land around the foothills of it. Lemce, a small settlement with a single street, was the closest Qismat village to that mountain. The border was only a few hours away. If any war or raid came, Lemce would be hit first. The question of which of their fathers could defeat one of these orc warriors in single combat was a common one.

He didn’t like to consider himself one for idle boasts. The other village tough had asked a fair question. How could he be a legendary man-at-arms for a famous lord if he couldn’t defend him from their most well-known enemy? If he didn’t even know what the threat looked like?

The question nagged at him all evening and throughout the night. The first light of day struck the horizon, and a single thought spurred him to action. The mountain wasn’t that far. He might be the poorest child on a poor farm, but he had it in his power to at least see what an orc looked like. What did he have to lose? Well, his life, but the worst his family would suffer was another mouth to feed. A problem his father complained about constantly.

He grabbed some of the food that was less likely to be noticed missing. He stuffed it all in a sackcloth bag, threw it over his shoulder, and quietly stepped out his front door. It occurred to him that he probably didn’t need to be stealthy. His parents wouldn’t notice he was missing until they needed some chores done. If he didn’t know better, he would expect that his father worshiped the god of Toil rather than Inferno, as most in Qismat did.

He’d always been one to roam, but he’d never traveled so far in one direction before. The fields around his village passed into the distance and the arid highlands rose in front of him. Beyond them, wrapped in low clouds, was the wide mountain of the dark orcs. Javad wasn’t sure why they were called that. The people of Qismat had brown skin themselves and certain eastern tribes were even darker than that. But he’d heard some tales about other orcs in the far north with a hue of green.

The border was hard to miss. A line of tattered Qismat flags, buried along a stretch of land, disappearing to the right and left. He stopped for a moment to stare at the symbol of his empire. A gold field with the mast of a ship stretching up the middle. To each side were angular sails. Green on the smallest, top layer, orange on the middle, and the lowest, broadest sail was crimson. Despite the nautical theme of the flag, Qismat had no large ships remaining. And it wasn’t much of an empire.

The colors were muted from age. This section of the border was not patrolled often. He’d heard his father say that the empire had no plan in place to defend their village. Any war would see it wiped out immediately.

When he stepped past the border, he was leaving behind any help from Qismat. Being so young, he didn’t know that humans were not permitted to cross into orcish territory either.

As he traveled higher in the foothills, he tried to recall everything he could about the orcish land. Tales of the war spoke of a five-year siege of the entire mountain. Great stones were hurled into every orcish building around the mountain. Any defenses were crushed into dust. The dark orcs survived this. They were diggers, creating tunnels deep into their mountain. Nobody knew what they ate to survive so long. Certainly it was horrible fare, to be grown in the darkness of a mountain. They had been fearsome fighters in the early battles of the war. In the depths of their mountain, they were like demons. Desperate and treacherous, setting ambushes and traps at every corner. Entire Qismat units disappeared as tunnels collapsed on their heads.

Stories of the bombardment became fact. Craters appeared across the landscape. Half broken stones of a uniform size were scattered across the hills. Javad passed several wooden ruins buried by these large stones. What splinters of the buildings remained were dried by the climate.

Beyond the next hill was smoke. Javad climbed to the top, staring down at a new building. A large longhouse, built from rough logs. A large hole along the peak let smoke pass out. Only now did he remember where he was, and fear returned to him. He’d come a long way, but now his feet refused to take him another step. He searched his mind for an answer. Why had he come to this place, far too close to an orcish building? His mind was forgetful, giving him no answer.

A growl came from behind. Javad turned in panic. An orc as dark as the people of the eastern desert loomed behind him. A hefty cleaver was in the huge fellow’s hand. Javad’s instincts returned to him in time to carry him sideways, away from the chopping blow of the cleaver. Javad felt a stinging pain across his chest. He felt blood roll down his belly, and it seeped through, staining his shirt red.

The orc stood over him, lifting the weapon. But a sharp call halted him. The orc turned and glanced behind him, a scowl on his face. There was a stream of sharp words in a language unlike any Javad had ever heard. Of course, Javad only knew of two. Common, the language of the Greihold kingdom, and the language of Qismat, his people.

The orc threw his weapon down, gesturing to whoever was behind him.

Added the cover. Clearly it's going to be a tumultuous relationship for our man and maiden.

Javad is not so sneaky as he thought.

The orcs of the mountain are trickier than their cousins up north. Pretty hard to spot them before they spot you. 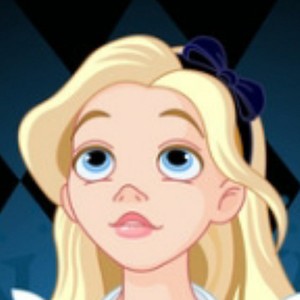 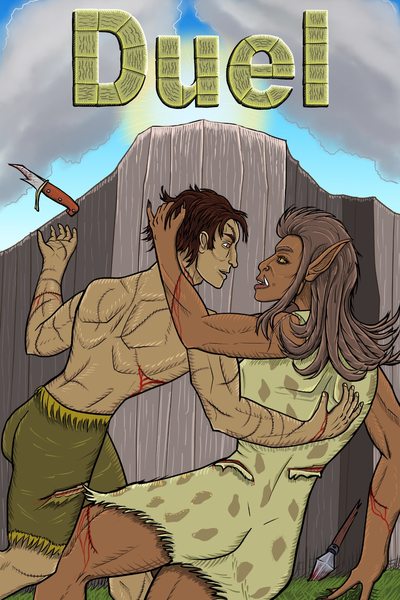 Duel is the story of a young boy from a poor family with dreams of becoming a warrior of legend. A common dream among youths, quickly forgotten with age. Curiosity drives Javad to seek out the ancient enemy of his people, the mountain orcs. He wishes only to see what they look like, but he isn’t as sneaky as he thinks.

His encounter with the equally youthful she-orc, Shora, will change his life. A boyish dream of becoming the strongest warrior in Qismat will become an actual goal under her instruction. Shora has a much more singular goal. She likes him. The she-orc lives with her brother on the side of their mountain, separate from the rest of their people. The lonely orc girl finds a kindred spirit in Javad.

Javad will prove more reluctant. They spend years growing up together, and he likes her as well. But he knows his people would drive him away if he gave into his feelings. With Shora’s initial attraction to him rejected, they will come to an arrangement. She will train him to be the most lethal human in his empire. He will help her make peace between her people and his.

But she will never give up her feelings for him, and it won't just affect them, but his empire as well.

A slow-burn romance taking place over years, set in the backdrop of an old empire tipping on the brink of calamity.
Subscribe 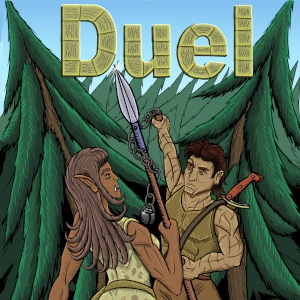