The soft pattering of water echoed throughout the cavernous remains of what used to be an underground garage. At one point it was a substantially sized construction concealed beneath the city streets. Now, it had been reduced to little more than a decimated crater. If seen from above, it looked as if something with tremendous force had rocketed downward causing the destruction.

Disparate streams of water snaked their way around jagged edges pouring down into the lower levels like makeshift waterfalls. It was quiet for a time with only the sound of running water and crumbling remains echoing into the dark. Laying on a bed of wire and other softer wreckage was the thin frame of a young boy. Small droplets of water crashed onto his small tan cheek. His eyes were closed, softly fluttering underneath the lid. The scene possessed a haunting tranquility, the eerie bliss of the comatose child juxtaposed against the surrounding concrete devastation. His eyes closed; the young boy’s lips made the slightest of movements. In his shut eyed stupor, the young boy’s hushed whispers filled the open air.

His timid mutterings were muffled by the ambient noise to being practically inaudible. Still he continued to murmur, almost as if speaking to something or someone imperceptible. Over and over, he continued to mutter. The same words continually passing his lips, “before time, before anything, there was nothing. Before…” His words were drowned out by a loud metallic screech and then the bombing started.

Explosions and the shriek of projectiles filled the air followed by the sound of something else. Something bigger and considerably more ominous sounding. The cacophony shook the young boy awake. His eyes freshly opened, they were dazzled by the disparate shafts of light creeping in through the cracks and holes around him. Dozens of buildings and structures had been reduced to charred husks up on the surface. With every shock of missile fire, the concrete skeletons shuddered, shedding more bits of debris to the debilitated streets.

The surface was a portrait of calamity but hidden amongst the roots of the city, the garage served as sanctuary, a haven from the chaos overhead. Rising from the bed of soft wreckage, he pulled himself up first by his elbows then into an upright sitting position.  His eyes slowly acclimated and he stared up at the jagged remains of the floor above him. Loose strands of cable and other detritus clung to the edges of the gash above. The stench of copper, saltwater, and smoke hung thick in the air. From up above the riotous sounds of combat roared. The young boy quietly stared up, enthralled by the huge booms and thunder from above, his labored breaths softly reverberating through his surroundings.

The young boy was caked in a layer of dirt and dust. His shirt, a soccer jersey, had been torn all the way down on the left side transforming the garment into a makeshift toga. The shorts he had been wearing were torn and stained but in one piece thankfully. The same went for the young boy’s shoes save a tear in the side of the right one. He dragged his eyes around the area, various chunks of metal and debris dotted the landscape like miniature mountains. Their peaks, jagged and sharp. In the pauses between the violent sounds from above, alarms and loud cracks crying out every so often. Not that the young boy could really hear. A fuzzy distorted ringing filled his ears, it felt like being underwater. He moved to stand when a sharp inhale of air knocked him back down into sitting. The young boy began to wheeze. A gurgle spurted from his throat before morphing into a hacking cough.

The sudden fit of coughing cut through the silence and the boy spat dirt and smoke from his lungs. Curling up, he tried to control his breathing while the coughs tore through his throat. The coughing slowed into soft wheezing before simmering out. After gaining control of his breathing-he pulled himself onto his elbows again and tried to regain some semblance of composure. Once his breathing had steadied, his thoughts turned to where he was and what was happening. The boy sluggishly stood up, wobbling as he did and unsure of his steps. He became more cognizant, but his memory was obscured.

The boy recalled he was in Manila, he remembered that he had been shopping in an outdoor mall with his mother and older sister, after that his memory became purely sensory. There was the smell of saltwater as huge torrents flooded the streets. Dozens, hundreds, were swept away in the vicious currents. Then came the tremors that followed in twos. One, two, one, two. Then came a flashing light-a huge brilliant arc of electricity and nothing. He remembered nothing after that.

Thin and lanky, the boy looked no older than ten or eleven. He was swarthy, had sandy brown hair, and his eyes were the color of burnt wood. Perhaps a different child would have been scared and spent hours cowering in the dark. The young boy was different. He was indeed frightened, but his father had spent countless hours in educating the boy in the minutia of dealing with emergency situations. His trained confidence was not ironclad, however.

A slickness trickled down the side of his head emanating from his right temple. Instinctively his hand rose to it and the tips of his fingers came back burgundy. At the sight, he was paralyzed, and the full brunt of his situation hit him. He may not have known where he was or what had happened, but he knew it was serious. This was not a case of running off and being separated from his mother for an hour but a moment where his mortality was on full display. The young boy may have lacked the words to express this feeling, but he felt it permeate his very being, down to his soul. His present environment reinforced this feeling of mortality.

Chunks of concrete and rubble were strewn around like makeshift tombstones. The ruined carcasses of cars and other vehicles littered the ground. From various places, trickles and streams of water flowed down. It smelled of salt, smoke, and charred meat. The boy reexamined his temple and his fingers came away less red than before. Feeling a small measure of comfort, his confidence hesitantly returned, and he began to explore. Walking from his initial place, he slowly concluded that this must have been an underground garage. It looked as if something had slammed down into the subterranean place, creating the ruined chasm the boy found himself in. Something strong, something powerful, something angry. The boy’s assumption about it being an underground garage was proven correct when he came across a smoldering cemetery of cars. Most of them were heavily damaged, with some on fire and others smashed into a new flat form.

Cold and curious, the young boy made his way to one wreckage that was billowing smoke and warmed himself against the fire. Near it, he saw a huge broken stump of concrete that had a dark puddle slowly spreading from under it. He made his way towards it but stopped when he saw the hand, and his eyes traced up from it to the arm to where the huge chunk of cement hid the rest of the body. The dark viscous pool of blood delicately cascading over the ground.  The little boy turned away and vomited. His father may have prepared him but seeing the trampled remains of a person was a sight no child could ever be prepared for.  As the young boy struggled to regain his senses, the world around him began to shake. In the distance, something loud bellowed.

One two. One two. One two. He flew down any available path away from the pursuing rumble. His lungs burning, he dodged jagged obstacles, looking back instinctively toward the sound of the mounting thunder. The sound grew louder and closer. A tremendous groaning shook everything around him causing showers of debris from the remnants of the upper floors. In his heightened state of awareness more memories came flooding back to him. A thick fog which slithered into the streets before the torrents of water. Jets screeching, the din of gunfire, and then screaming. His mind flooded with recollections; the little boy failed to see a metal rod sticking out of the ground in front of him. Seconds before stumbling on the rod there came a massive roar. A huge object collapsed down into the lower level of the garage. With the object came the rest of the upper floor and the little boy was flung into midair from the resulting shockwave.

The great crash threw up clouds of dust and smoke. Time became incremental for the young boy. His body twisted and turned in the air until he could see exactly what had punched into ground, a massive fist connected to a lanky sinewy forearm had rocketed down and pulverized the remains of the garage. The appendage looked humanoid save for the thousands of times bigger it was than a normal human arm and the mottled green coloration. Thick cords pulsated from underneath the skin, giving off a light blue translucence. The little boy, still airborne, looked upward. Through the vapors and fumes he could see two large luminous green spheres, then he saw nothing at all.

Thanks for reading and hope you enjoyed! Let me know what you think and if you wanna see more stuff or art check Monstra.City on Instagram! 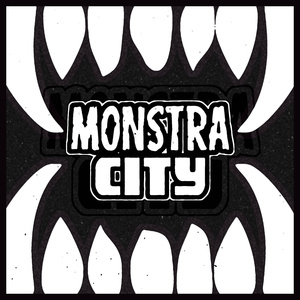 A city sacked. A boy dreaming amongst the ruins. In the distance, something gigantic comes his way... 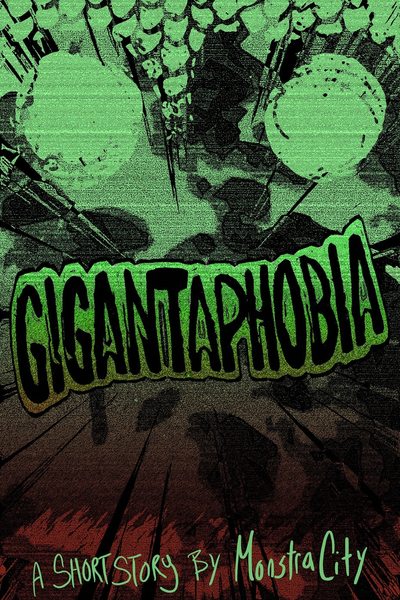 Shock and thunder rocks the world above as a young boy finds temporary sanctuary in the guts of a ruined city. Surrounded by concrete corpses and the absolute wreckage of the modern world, he navigates the depths. In the distance, something roars...
A young man reflects under the cover of night. He sifts through the miasma of pain and confusion. Surrounded by looming shadows and haunted by
something.
Something with huge shimmering eyes...
Subscribe 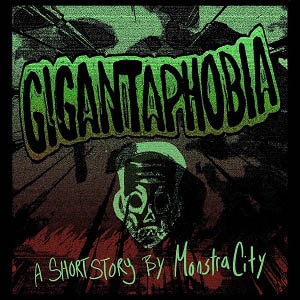