Have Gun, Will Reincarnate: Memoirs of an Isekai Knight

Howdy folks.
Friendly neighborhood MC here with a couple of admin notes before we get started. That’s MC as in “main character,” not “master of ceremonies.” My rap career was lamentably short. I wanted to make my stage name Big Red, but that was already taken so I got stuck with Juicy Fruit and things kinda went downhill from there.
Where was I?
Right.
I didn’t want to write this story. For starters, I’m not a writer, I’m a troubleshooter. In other words, if I see trouble, I shoot it. After you read this hot pile of garbage, you might just want to shoot me yourself.
Well, tough. I’ll be long dead by the time this gets published. Spoiler alert, by the by. I’ve got a date with the big sleep here shortly. Hell, pretty much as soon as I get done writing this little forward. I’m not mad about it. I’d rather go out with my boots on than grow old. I am a little miffed that the Goddess told me to spend my last couple months on this world writing, but when a Goddess says write a book, I write a book.
For whatever reason, She thinks that my story will help folks who come after me. And, She also thinks that it’ll be best if they read about everything that’s happened in my own words. I don’t know that I agree, but I’m not a nigh omnipotent deity. Like I said, if She says write a book, I write a book. She’s not steered me wrong yet.
Having said all that, I can’t, in good conscience, inflict this on you without letting you know what you’re in for.
First and foremost: my memory is awful. I’ve had enough knocks to the head that my brain is leakier than a Dutch dam made of Swiss cheese. I tried to get the broad strokes as correct as I could, but I had to make some educated guesses in places. Mostly around the dialogue. Whenever possible I cross referenced my version of events with other people who were there, but it’s never going to be 100% right, so I settled for getting across the gist of things.
It should be noted, however, that the gist of things is often soaked in blood. The whole time I’ve been on this world, I’ve been followed by war and death, and my hands aren’t clean. All by my lonesome, I’ve probably killed more people than Ebola, and a lot of those folks died in ugly, messy ways. The Goddess told me not to sugarcoat anything, so if you’re squeamish, you might want to turn back now. You may learn what the inside of someone’s kneecap looks like if you’re not careful. Consider yourself warned.
Speaking of squeamish, I’ve got a handful of wives and enough kids running around the place that it’s probably a good thing I’m kicking the bucket now, before someone thinks to invent child support. I dunno if anyone told you where babies come from, but it’s not the stork. We did the sex, and the bits that are relevant to the story are included. Not because I like to brag or anything, but because they’re relevant to the story. I tried not to linger overmuch on the sexy fun time, but I couldn’t leave it out, either. If you don’t want to read about consenting adults bumping uglies, this ain’t the book for you.
And finally, to get this manuscript written, I had to do a lot of jobs that I’m wholly unqualified for. I’m a bad writer, a worse editor, a terrible linguist, only passably skilled with horses, and the last time I tried magic, I had to explain to the Goddess why I’d summoned 5 very confused Germans and a heavy tank. Note to self: if you’re going to try to summon a tiger, make absolutely sure it’s the right sort of tiger. Didn’t even get to keep the tank.
Anyway, the point is, I’m not good at any of this stuff. I had to learn enough to make due, so you’re just going to have to deal with my substandard writing, explanations, and so on.
Or, and hear me out on this, you could just not read any further. Just put the book down and walk away, before I get the chance to make an ass out of myself.
Ah, who cares. Not me! I’m already dead.
Most sincerely,
-Stoner

Your writing is fine! I’m excited to read, but make sure you put warnings on the sketchier episodes !! 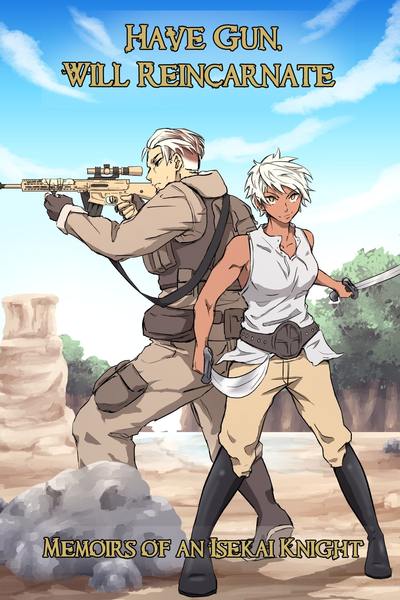 Have Gun, Will Reincarnate: Memoirs of an Isekai Knight

Ah hell, they told me I had to write a blurb for this thing. I hate writing blurbs.

Hi, I'm Stoner, and I'll be your main character. To make a long story extremely short: I was a soldier, I got shot in the head, and then I woke up in a parallel world with magic and swords and all that. Standard plot for a big dumb isekai, if we're honest.

Except, it's not. I'm not a broody teenager with the personality of a cardboard cutout. I'm a broody grownup with a caffeine addiction and crippling depression, and instead of magic and swords, I get my trusty rifle.

There's a war coming, folks, and the Goddess of this world needed a Knight who knows a thing or two about waging one. War was my life. Then, it was my death. Now it's my life again. Funny how that works.

Since I can't even get away from the battlefield by dying, I reckon I might as well enjoy myself. You might as well, too. So grab you a chair and a bucket of popcorn, and get ready for the tale of my time as an isekai Knight.
Subscribe 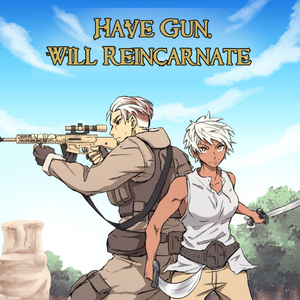