The love lights of lightning bugs glimmered into the night as soft chirpings of crickets echoed alongside them. Traveling along an indiscernible path, footsteps from a lonesome hooded figure were drowned out by the surrounding nature. A single glass lantern convoyed the wanderer on their journey. Hung onto a thin pine branch, the lantern swayed silently.

As the moon rose high above the night sky, the lantern, weary from travel, spoke in a hoarse, dazed voice, “How long until we get there?”

Although the lantern’s companion may not have been one to require rest, the same case was not so for it. Truth be told, its flames had been burnt out long before. Traveling for countless nights and days, the journey had seemed interminable. But how could it possibly give out now that its companion needed it the most? A journey through a spiritual forest with the moon as the sole light source was risky to say the least.

After a moment of silence, the hooded figure responded with a sweet singsong voice, incapable of masking their guilt, “Almost there. Maybe a few more nights. Promise it’ll be worth the wait.”

Although the lantern was unable to see it, their companion’s smile had definitely been felt. Along the way, the wanderer had spoken many times of the destination, their dreamy vision shining through. Even if their response may have been a white lie and even if the lantern knew it, this was a detail unnecessary in any other form but thought.

“Hmm,” an acknowledgement was the only response the weary lantern deemed appropriate. It would’ve followed the wanderer regardless of how many restless nights lie ahead. Both from duty and doting.

Indulging themselves in the silence of each other's company, the two traveled forth.

Through small, fragmented steps, the wanderer picked up tid bits of pine needle fragrance along the way. Such a feat wasn't difficult for the barefooted wanderer. Though their steps were swift, each held a certain prestige in momentum, leaving behind no damage in their wake aside from a few scattered needles.

In the midst of chittering forest critters, the wanderer made a suggestion, “To keep the boredom at bay, why don't you tell a few stories from your past adventures? I would love to hear about them.”

Instantaneously the lantern shone brighter as the flames distorted itself into the shape of a bird, flying out from its glass container. The remnants of a lantern’s flame circled around the wanderer in childish anticipation, “How about one of the Asherdawn Banquet?”

“What is that?” From underneath the hood, the wanderer's eyes lit up with curiosity, “I've never heard of the Asherdawn banquet before?”

Stopping in its track, spreading its fiery wings, the bird shaped flames boasted, “Of course not. Such a banquet is only common practice in a far away land. Many, well most, may never find their way there in a lifetime.”

“And you’ve been there?” The soft voice of the wanderer sparkled in childish interest, fanning the flames in front of them.

“Of course! I've been to many places. This is only one of them.”

“What will this story be about?”

“This is the story of two human children incidentally wandering into the Land of Demons.”

The surrounding forest dimmed down in anticipation for the story to come as twitterings faded into the distance. 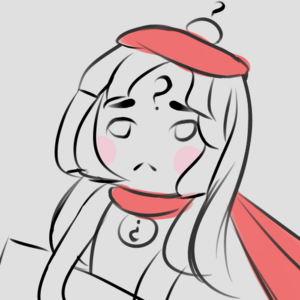 I did it, first episode °˖✧◝(⁰▿⁰)◜✧˖°

Two sisters accidentally wandered into the Land of Demons, just in time for the spring banquet. 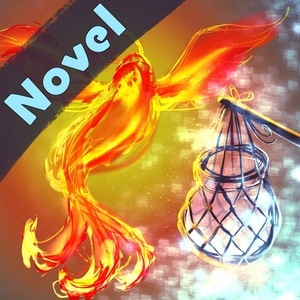 Weary from travel, a lantern and a wanderer told stories they came upon over the years. 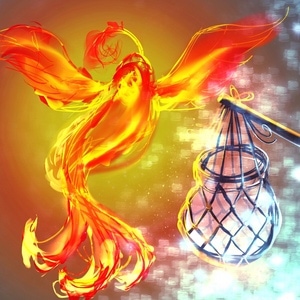