Gabrel was thinking of only one thing “I have to head to the main village” before he was going to move off the bed, he heard sounds of footsteps near him.

Gabrel tried to act sleep as a response, it was a surprise for him to hear a person’s presence.

The door of the room was opened, Gabrel opened half of one of his eyes to see who entered the room, he couldn’t see clearly, but some things were obvious.

It was a tall old man with blue hair and light blue eyes, the mysterious old man entered the room and started to get closer and closer to the bed, the closer he gets the more worried Gabrel gets.

The old man stopped at the side of the bed and looked at Gabrel, he didn’t say anything, he was just looking at him, Gabrel felt relief because he thought that he tricked him with his fake act, though.

“Don’t act like you’re asleep.” Said the old man with a hard tone

It sent shivers to Gabrel’s spine, but he fought his fears and left his head to face him, he then concluded that this old man was approximately in his late 40s.

Gabrel thought that the old man was a water element user because of his blue hair and eyes which are the common characteristics for the water users, blue eyes and hair, and snow-white skin.

“W-who are you sir.” said Gabrel with a shaky voice.

“My name is Atlas Pohg.”

Gabrel did hear him, though, he was wondering “what kind of names is that?” but he told himself that maybe it’s a common name among the water users.

Gabrel was afraid, is it okay to reveal his name and chit-chat with a stranger after knowing only his name five seconds ago? It will maybe be rude if he didn’t since this man was the one who saved his skin.

“M-my name is Gabrel Fidel, nice to meet you, sir.”

“I already know who you are Gabrel, you’re the son of Elmos Fidel, the chief of the sound village which is located in the Southwest of the continent.”

“Of course, your father is one of my dearest friends, he was talking about you sometimes, and that’s why I recognized you.”

“You’re my father’s friend” Said Gabrel while thinking “why didn’t I know about that earlier.”

“Yeah, we were friends for a long time.”

“You’ve already arrived son, this is the main village.”

The signs of happiness were clear on Gabrel’s face, his mouth formed a delightful smile and his eyes sparkled, but Pohg’s face felt like he saw something that wasn’t expected.

“Mr.Pohg, can you call my parents and tell them that I arrived? I’m sure they’re worried about me.”

Gabrel was actually thinking of telling his parents of his big success, the poor kid doesn’t have a clue of what happened.

“Hmmm? Call your parents? What do you mean?”

“Sir, don’t you have a contacting tool?”

“And I need to use it, please, I just want them to know that I arrived at the main village.”

“You……don’t know what happened to the village?”

“Maybe your parents didn’t want to tell you so you can listen to them and get away from the village without hesitation.”

“S-sir, I don’t understand what are you saying, scare of what?”

Gabrel start to get worried, he felt something odd back in the village, but he didn’t want to ask, thinking that it will be pointless.

Pohg lowered his face, he was troubled and didn’t know if it’s fine to tell him, however, he can’t hide the truth.

“Your village has been destroyed, and your parents…died in the process, they didn’t want you to know so you can run out.”

Gabrel’s eyes were wide open, he didn’t move a muscle and just asked.

“…what do you mean destroyed? T-that’s impossible, my village isn’t weak, my parents aren’t weak.”

“They weren’t, but it was a big army, there were a lot of enemies and the village didn’t have a chance against all of them.”

Gabrel then recalled the soldier who interrupted them before ”We saw a naval fleet approaching our borders, sir.” though, destroying his village wasn’t even reasonable, he just can’t comprehend.

“How much did I sleep?” asked Gabrel with frozen expressions.

Gabrel got off of the bed in an instant, he ran out of the room as fast as he can, he wants to head to the village and see by himself.

Pohg was shouting at Gabrel, but he continued running without a moment of hesitation.

Gabrel looked at his right and saw stairs leading to the lower floor, he reached the front door and opened it while Pohg was still chasing and shouting to him, but he didn’t care, he just wanted to go to the village and help his parents.

Gabrel went out of the wooden house and saw a wall made of frost, the whole house was surrounded with a dome of frost, he summoned his piano, pressed some buttons, and broke the frost wall to get out.

The hole on the frost dome unleashed cold winds that started to eat his whole body again, he ignored everything around him, Pohg, the cold, and the whole new place he was in.

Gabrel looked behind him to see if Pohg was still chasing him, Pohg was standing there and was only moving his hands, the snow around Gabrel started to move.

Turns out that Pohg was controlling water and grabbed Gabrel so tight so he can’t move, Gabrel tried to summon his piano again, but he can’t move even his finger, Pohg got closer to him and shouted.

“IT’S TOO DANGEROUS TO GO OUT IN THIS BLIZZARD, DO YOU WANT TO DIE YOU LITTLE BRAT!?”

“I DON’T KNOW IF YOU CAN UNDERSTAND THIS OR NOT, BUT THERE IS NOTHING YOU CAN DO, YOUR PARENTS ARE ALREADY DEA———”

“SHUT UP! DON’T YOU DARE TO SAY THIS, DON’T EVEN THINK ABOUT IT IN FRONT OF ME!”

Gabrel’s eyes were full of tears, Pohg started to loose his grab on him and said.

“I’m sorry kid, but you have to face the truth, your father sent me a message that you will come here, he said that the enemies are everywhere. Elmos entrusted you to me, and I promised that I will take good care of you, that’s why I won’t leave you to do whatever you want. You have to continue on living and keep progressing in your path, that is your father’s will, so you have to fulfill it.”

And on that day, Gabrel made his mind and decided that no matter what, nothing will stop him from having his revenge.

Unknown place Meanwhile in an

In an unknown place in the fire continent, after several hours of the sound village destruction, a soldier was wearing red armor, he was running in a long dark hallway with a red wooden gate at its end, he stopped in front of the gate to take his breath.

"Knock Knock can I enter, sir?” said the soldier.

“What do you want, I’m busy.” came a voice from the other side.

“Sir, I came to report on our battle against the sound village.”

The soldier interred to, he gave the mysterious man who allowed him to come in a salute.

“Silence.” interrupted the mysterious man while looking at a package of paper.

The soldier, meanwhile, was standing still, waiting for the mysterious man’s command to continue his report.

“Sir, I…if I may ask a question?” hesitated the soldier.

“I-is it really worth it to sacrifice all of our special forces and to use the biggest ships we had to just destroy a small village in the water continent? Wasn’t going to be better to use all of that power to plan and bring down one of the 3 main villages and take control of a whole continent?”

The mysterious man looked at the soldier for several seconds, then he turned his gaze to the papers in his office and talked while looking at it.

“I got rid of my biggest hindrance just now, totally worth it.”

The soldier showed an unsatisfied expression on his face, apparently, he didn’t understand what his commander meant with these words so he didn’t get an answer to his questions in the end.

“Now you can leave.”

The soldier gave the man another salute and went out of the office, despite being unsatisfied with this answer or not, he had to leave the office or his commander will get angry, and that will not be very nice for him.

The soldier went out and closed the gate behind him, leaving the mysterious man alone.

“I just got rid of my biggest hindrance.”

The mysterious man was looking at the gate while talking to no one in particular, but he continued with a small smile.

“No one will prevent me from reaching my goal this time.”

You've finished the first chapter of the story, I know it's confusing, but it was planned for the first chapter to be like 50 pages, of course, that was too much, so I started to upload it in parts, anyway, don't forget to make a review and tell me everything you might don't like in the novel, and if you liked my creation, you can support me financially, you can visit my page on this link (https://paypal.me/NOBA3A?locale.x=en_US)

At last, I wanna thank everyone who gave my story a chance. 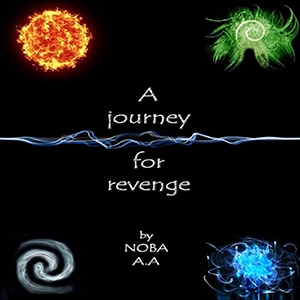