"But who's the one who did that?" asked Gabrel.

"He doesn't know, the one responsible is anonymous."

"But don't you think this soldier may be fabricating the whole story?" said Trenos.

"I can tell if the person in front of me is lying or not, he said that when he dies, they will leave his family alone, but if they discovered that he ran away or told us this information, his family will be in great danger, the best way to save his family is for him to obey and die in the battlefield."

The trio learned a lot of things because of this story, one, this man has to be stopped, two, the one who used innocent people like that is really a scumbag.

Gabrel's face straightens, what he heard right now made him more motivated to get his revenge.

"How much time will it take to reach the earth continent?" asked Gabrel.

"The journey will take from 6 to 10 days, it will start after half an hour, are you ready?"

Eva had eager eyes and a challenging smile, Gabrel still frozen with the same serious face, Trenos didn't have any expressions like an ice cube, but all of them looked at Pohg and only said one line in unison.

"Good, now let's have our breakfast."

…this scene feels a little off.

The family had her breakfast peacefully when they finished, they said goodbye for Pohg, and headed to the borders of the village, unexpectedly, Gabrel didn't open his mouth along the way, but when they went out of the village he said.

"Well, what about making a small race to the green land?"

"It's not a time for your games, Gabrel," said Trenos, he was reading a book.

"Tre, why do you like to break the fun all the time? Consider it as training, and we will get there faster like that."

"Yes, I am." said with a challenging smile, she looks at everything as a challenge that she has to beat.

"Are you sure? Winning against a water user on their lands is not cool."

Eva and Gabrel were excited for the race, on the other hand, Trenos didn't show any signs of being interested or any signs of anything at all, he was just focusing on the book he was reading.

Gabrel summoned his blue instrument behind his back, Trenos gathered some snow from the ground and turned it into a small wave under him, Eva made a long way made of ice and made some tentacles of water to push her forward.

"Ready?" said Gabrel as he raised his hand to his chest.

Gabrel's hands went back to his piano and pressed some buttons, the created soundwaves pushed him forward.

Eva started to skate on the ice road she made while using tentacles to push her forward.

Trenos were using the waves he made to move, he wasn't interested so he didn't put any effort into it, he was just reading his book, he will surely lose at this rate, but he doesn't care.

Gabrel was creating small blows of sounds under his feet to make himself faster, he was struggling against Eva in the first place.

After a whole hour of racing, Trenos were still in the last place, Eva and Gabrel were changing from first to second every minute, the fight between them in the first place is on fire.

Eva looked at a big rock placed at the side front of her and made a smile, she was planning something, though, Gabrel was at the first place and the end line was near.

"Give up, Rel, you will not beat me." Said Eva from behind.

"Oh yeah? Then why am I still in the first place?" replied Gabrel with a mocking tone.

"You're completely an idiot if you thought this will last long."

"We'll see about that when I cross the finish line."

After several minutes, Gabrel saw an unexpected surprise, it was a big slope which made him lose control, and at last, Eva was the one who won the race.

Gabrel was using a technique which made him faster by creating small sound blows under his feet, he didn't expect a slope so the sound blow sent him flying off the ground, he was forced to reduce his speed so he can land safely.

Meanwhile, Eva used the slope as an advantage, since she's skating by turning the ground into ice, the slope increased her speed which made her cross the finishing line first, the line between the grass of the green land and the snow.

"OK ok, I admit my defeat." Replied Gabrel with a smile.

Trenos arrived at them at the last place, Gabrel looked at him annoyed from his attitude, he still reading the book and didn't take them seriously, he was just playing along.

"So, where is the carriage," asked Gabrel.

"it's there," answered Trenos, he may read a book but he still has a sense of what's around him.

The carriage wasn't luxurious, a wooden carriage with two brown horses, it can be weird to see a normal carriage when we talk about a chief of the main village, because Pohg is technically the leader of the whole continent.

"Are you the people who want to go to the north seaport?"

With an idiot smile, answered Gabrel.

"Yep, we're the team who came for the so very secret miss….ouch!?"

Eva reacted fast and saved the day, she slammed her elbow to his stomach before he finishes the sentence, she then said with a smile.

"Ok then, ride the carriage, we will arrive after 3 hours." Said the coachman, not caring for the odd scene that happened in front of him.

The trip was normal, Trenos was still reading his book, Eva and Gabrel slept, after all, they spent too much energy for the race at an early hour.

Gabrel was putting his arm on the edge of the window and used it as a pillow, Eva meanwhile was sleeping in a sitting position, but the constant shaking of the carriage made her head fall to Trenos's shoulder, he didn't mind it though.

After approximately two hours, Gabrel and Eva woke on the sound of people, they arrived at the north seaport village, a village that's big enough to surpass even the main village's size.

This village was the best place for traders to live at, most of the travelers and trade delegations who comes from all over the four continents like to do their business here.

This place can be considered a gold mine, it's the best place to sell all your products, the biggest collection of different shops, you can find all kinds of weird things from all over the world in one place.

The seaport village though isn't only a place for traders, it's also a good place for vacations, good weather, hot springs everywhere, comfortable good-looking places to stay the night, and playful shows called the dancing fount.

Gabrel and Eva were looking at the shops and the loud people going back and forth, they felt nostalgic for the days when they went to this village before, Pohg had to do a job here and he took them as to take a family vacation as well.

When Gabrel and Eva went here before they felt something, this village was loud and lively, it was the complete opposite of the main village that can be described as an abandoned village, and anyone can hear the sounds of the cold winds of the morning there, a deadly-quite village.

After like half an hour, the seaport now can be seen on the horizon, there was a big wall with a metal gate and two soldiers guarding it.

When the carriage approached the gate, one of the soldiers came to the coachman, the coachman took out a piece of paper from his pocket and gave it to the soldier, it was an entry permit which made the soldier open the gates for the coachman.

An entry permit is a piece of paper which can be given to traders or the people who want to travel on a ship, you have to go to a particular organization, fill some papers, and wait until you get it, or else, you won't be able to surpass the front gate. 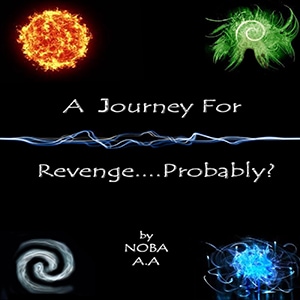