The cafeteria was a few hallways away from the rooms behind the auditorium. It was gigantic and had massive windows covering one side. The lights above all had vines growing on them. Despite all the students arriving, it was pretty empty, with just a few people sitting scattered about.

“First, I need a coffee,” Diast said. “My head is killing me. So we’ll start our tour of this fabulous establishment at...this vending machine! It has everything you need, if what you need is coffee or pop. And if the cafeteria is closed like it is now. You’d think they’d have that going with everyone getting here, but that’s how it goes.”

After getting us all snacks (a move which I think put Kalei firmly on team Diast), Diast took us from the vending machine at the cafeteria outside to a nice field area. All of Rising Shards’ buildings were connected in a sort of loop, and the big field in the center was for gym stuff.

“Alright, I don’t feel like doing a full tour so I’m just gonna point everything out from here.”

“I dunno, I think they’re fine.” Oka said. “This is a pretty big school, after all.”

“It is.” Lillia Cadence said. “I had received my tour with the Rising Shards Gold Tour, so I suppose I wouldn’t mind a truncated trip.” Lillia was the would-be Rising Shards model girl. She noticed me staring while Diast took a big gulp of her coffee and I busted out a “pretend I was just turning as they look my way” move as soon as our eyes met.

Dr. Diast’s wristband projected a checklist of locations. She sighed as she quickly scrolled down and up the list with her other hand.

“Behind us of course is the cafeteria, which is connected to the auditorium. Next to that are the dorms, which again are pretty self-explanatory, one for girls on our side, one for boys over on the other side, and then the Kanibari dorms are separate from the others behind the school. I don’t know why they think tours need to be so complicated.”

Diast checked off boxes on each line of the list as she went.

“Let’s see, there are the classroom buildings. They’re kinda divided by grade and kinda divided by subject. Over yonder Falling Shards is there with the same layout, but that’s for boys so don’t worry about it. There are some buildings between the two schools that are shared like the auditorium, the fields, and this cafeteria. It’ll make sense by the time you’re a senior. OK! Any questions so far?”

“Where’s the nurse’s office?” Laenie asked. “I get sick easily...also, where are the designated disaster areas in case of an emergency, be it weather or another sort of crisis? How exactly are the classroom buildings divided? If the layout of both Rising and Falling Shards is the same, are we penalized for accidentally entering Falling Shards? Are there any classes shared between the two schools? Why did the announcement at the start only mention Rising Shards? Is there an indoor gym for when it rains? How can a tour of a Cani school be complete without any of the specifically Cani related areas?”

The projection from Diast’s wristband changed.

“For directional, emergency, or other facility questions, please refer to your wristguard and waypoint markers will be shown.” The wristband voice said.

“Uh, yeah, do that,” Diast said. “That stupid voice feature is good for something after all. Does that cover it?”

“I suppose so,” Laenie said.

“And the other questions?”

“I was going to ask why you still need a wristband,” Aira said. “If you’re an adult, don’t you have control over your Cani powers?”

“Yeah, I do, but they’re required here for school stuff,” Diast said. “They’re synced up with the school network. So I can do attendance on them, mute you guys like you saw, stuff like that. Oh, and lots of stuff in the void.”

“Oh,” Aira said. “I was going to guess the wristbands were from some evil conglomerate using dark tech magic to control all of us, but that makes sense too.”

Lillia Cadence rolled her eyes so hard I thought for a second that she’d fainted.

Next, we went into the oldest looking building on campus, in the corner of the fields. It looked like a stone temple. I caught Oka with a strange look as we walked up the stairs. She looked distant, far from the bubbly personality she had been showing before. I figured I was reading into things too much.

The inside of the temple-like building was filled with a reddish colored sand. There didn’t seem to be any rooms in there, just lots and lots of sand. A few scattered metal objects jutted out. Diast led us to one that looked like a big crystal ball on a pedestal.

“Here’s our specifically void related area,” Diast said. “When classes start, at least once a day you’ll have to go into the void. Sometimes for research, sometimes for fighting. Mainly, you’ll have a sequence you’ll have to go through that is generated by your collective group mindset, that we’ll take care of during Jump Fifteen. It’s totally mostly safe, but as a precaution we have to test if you will actually be able to go before we really start. Uh, Laenie?”

We turned to see Laenie was still at the front entrance, rocking back and forth on her heels.

“I’m gonna stay back here,” Laenie said. “I don’t want to get sand in my shoes.”

“Get in line, and one by one you each touch the thing and I mark down that you’re good to go for void time.” Diast said. “How about, Zeta first?”

Now it was my turn to nervously step forward. I could hear a low hum coming from the sphere. It didn’t have any fingerprints or anything on it, and something about that made me uncomfortable touching it. Maybe I just wasn’t able to go there at all. Maybe they’d kick me out already. But if that happened, I’d go to Wildfire Hearts.

I knew I was holding the class up and my face got red thinking about everyone being annoyed with me. Except maybe Laenie. I couldn’t see someone who was even more anxious than me getting mad at me for this.

“The obelisk sends an electromagnetic pulse into your fingertips and can tell if your natural bioelectric frequency matches that of the wavering pocket dimension, or ‘void’ dimension. Which it will because only Cani have that frequency. And you’re a Cani.”

I worked up the nerve and poked my finger forward. And missed. I touched the pedestal and cursed my hand-eye coordination sucking so bad when I was scared. I tried again and actually touched the thing. The hum got a little louder, and I felt a light tingle in my fingertip. The sphere turned pink.

“Pink is good,” Diast said, checking my name off on a projection list. “Alright, next.”

Oka placed her palm on the sphere, looking as though she’d done this a hundred times. Kalei grabbed it with both hands, looking like she was trying to test its weight and maybe lift the whole thing up. Lillia Cadence somehow looked like a majestic ballerina just like poking a magic void sphere, and hers even seemed to light up with a beautiful pink hue. I felt less bad about my nervousness because it took Laenie even longer to agree to touch it and cried in the few seconds until it turned pink like it did for the rest of us. Last was Aira, who immediately licked the obelisk without prompting.

It really felt like my Cani journey was starting now. The window to bail was getting smaller and smaller.

“This makes my job a lot easier, it’s such a pain to fill out the paperwork for kids who get orange.” Diast said. “Orange means you can’t go in the void. Don’t get me started on what happens when it turns white with purple dots.”

Diast brought us back to the auditorium.

“Alrighty, just the principal’s speech and then that’s it for today,” Diast said. “I’m looking forward to class with you, you all seem neat, yadda yadda and good luck.”

“Why good luck?” I asked. Was the principal gonna be mean? I pictured a terrifying monster of a man looming over the auditorium screaming at us. Diast just laughed as she left.

Zeta gets a tour of sorts and then has to maybe touch a mystical orb.

Aria is now my second favorite, she’s the type of archeologist that would taste 1000 year old honey to see if it expired, which actually happened. 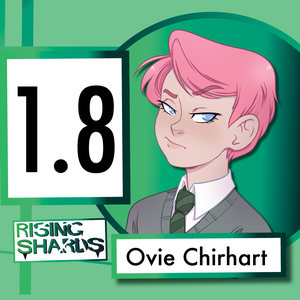