If I was going to start this journey to pass the Benta scholarship right, I knew I had to be on time for our first day of class. I was proud of myself for waking up early, and I looked great in my uniform, had time to enjoy breakfast, and entered class radiant and ready for action.

Then I woke up to Oka poking me in the shoulder.

I checked the time. Only a little late from when I wanted to be up.

“Didn’t want you to miss anything!” Oka said.

For the weirdness of the massive life change, I actually slept pretty well. I changed into my new uniform right away. I cannot describe how overjoyed I felt that we could actually wear skirts with our new uniform compared to the gross prison costumes I would have had at Staverius. Matching Rising Shards’ official branding, we had a color scheme of dark green, a grayish green, and white. Since we were first years, we each got a pin with a single fang on it.

“Hey, how come you guys got syrup packs and I didn’t?” Oka asked.

“They had a little tray at the end of the line,” I said.

“How did I miss that?” Oka said. “I am not having dry waffle sticks today.”

We watched as Oka marched over to the front of the line, checking with one of the cafeteria workers for syrup. The worker wasn’t budging, and by their body language it looked like a debate started immediately.

“You think we should help her?”

“Nah,” Kalei said. “I mean, she coulda just asked us for some of ours.”

“Would you have given her any?” I asked.

Each table in the cafeteria had a little radio box that was tuned into a few big screens playing TV. One was weather, one was a morning news show called LE Morning Croissant, and a welcome video for Rising Shards similar to the default channel in hotel rooms that was going over features of the school and pictures of the nearby beach.

“Oh, oh!” I said. “Tune it to that news one, they’re doing a Tower of Hate and Love preview today!”

Kalei fiddled with the audio a bit.

LE Morning Croissant featured about twelve people all seated around a couch shaped like a croissant. The camera was only focused on two when we tuned in.

“Fresh off the start of a new semester at their majority owned Cani school, the Kilanders are at it again,” A male host said. “Rumors of infighting and intense drama about their recent purchases and acquisitions paint a picture of battle!”

“Luckily the camera crews are always near them!” The woman host said.

“I hope a paparazzi spots them and gives us, you know, a little sneak peak of the next season of House of the Kilander House.”

“Oh, but spoilers! Don’t you wanna start the season not knowing anything that’s gonna happen?”

“Speaking of spoilers, after this break we have an exciting sneak peek at the next episode of Tower of Hate and Love.”

Kalei muted the screen while the commercials were playing.

“How many Kilanders even are there?” Kalei asked.

“There’s Penteldtam, Kitty, Berin, Aki…Aki’s married to our teacher Caya, I think. There’s Raz, Reit, and that’s all the younger generation. Then there’s their parents, Mr. Kilander and Mrs. Kilander.”

Oka got back in time with four syrup packs just to see Kalei and I geeking out over a 10 second clip of Tower of Hate and Love. She didn’t seem to get why we were so amped about a hypnotist lamenting his boyfriend’s upcoming tightrope performance at the underworld circus, but one day I knew we’d get her hooked.

“The fourth season is my favorite.” A memory of Jeans’ voice, just a whisper.

“Hey, let’s look over class schedules!” Oka said. I wondered if Oka could tell I was a smidge upset.

“Then we can observe our calculators’ processor units and compare microchips!” Kalei said in an overtly nerdy voice.

“Oh, shut up,” I said before trying the doofy voice myself. “I would rather compare, uh, video game…stuff?”

Oka convinced Kalei to get her schedule out too, and I was glad our group got to have all the same classes.

“Oof, science, books, social studies, and math all in the morning.” Kalei said. “What did I do to deserve this?”

“I don’t want to miss today though, so we should head to class soon,” Oka said. “Our first class is with Dr. Diast so I want to set a good impression.”

“So we should treat our advisor who’s gonna come with us into the void with respect?” Oka said.

I hoped we wouldn’t go into the void on our first day. That just seemed like too much. I needed like a week or two more to prepare. I knew I had to eventually though.

We were in one of the science rooms for our first class. There were weird cheesy posters that had Cani protecting their fangs from science lab stuff, and one had a Kanibari protecting their fur from an open flame from a lab experiment. I sat down between Kalei and Oka, which made me feel a bit safer.

Dr. Diast walked in with a sigh and threw her folders on her desk. She wore a lazy jumpsuit. She opened an energy drink and took a gulp before starting class.

“This is what I’ve said to the last few years of students,” Diast said. “So if you watched this online on one of those weird class recordings they put online, sorry for the repeated words! Instead enjoy me looking much better than I did three years ago. The Gold Press Thigh Blasting Workout is really amazing. I’m not paid by them to say that, I just really like it. But I did tell them they should sponsor the school. I mean we could use one non-Kilander owned sponsor, right?”

Diast loaded up a 3D projection slideshow that looked like it was put together about five minutes before.

“Oh and welcome to Rising Shards, by the way,” Diast said. “I’ve been studying Cani stuff my whole life, before and especially after the ol’ fangs came in. And that’s what this is all about! That weird ol’ mutation but it’s not a mutation thing.”

Diast brought up a slide of all the possible Cani traits. The biggest diagram was of a mouth with the fangs, but they also showed the other common mutations, like ears or tails or whatever.

“You guys are all in various early stages of being Cani, which, yay, is like Puberty 2: But Worse. While saying that sometimes sequels are the best part, so you get some great stuff out of this. The power part.”

I could see heads start to nod off. A long ruler slammed to the ground, making me nearly fly out of my chair while the sleepy students snapped to attention. Diast turned around.

“Ha! Glad that worked,” Diast said. “Last time I tried using my gift with my back turned I accidentally projected er…something I shouldn’t have…into my teacher’s assistant’s mind. Awkward. You’re lucky I didn’t do my patented psy-kick. Eh? Anyone?”

Nobody said anything. I put on my best “teacher made a joke that I personally didn’t find funny but I didn’t want them to feel bad” smile, but Diast wasn’t looking my way so my efforts were in vain.

“And the other thing, the void thing,” Diast said. “That thing everyone keeps talking to you all vaguely about.”

Zeta, Oka, and Kalei have their first day of class at Rising Shards. 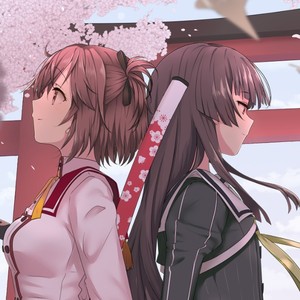 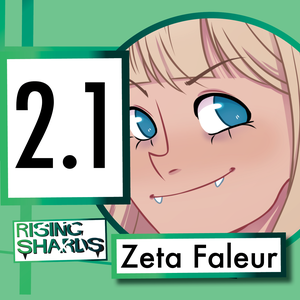